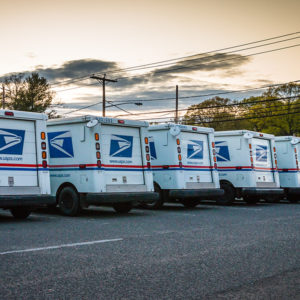 The United States Postal Service (USPS) said it fully expects to be ready for the anticipated deluge of mail-in ballots in the Delaware Valley in November’s election, despite a recent media report saying Philadelphia’s mail service is already overwhelmed.

The Inquirer reported over the weekend that staff shortages and new rules about overtime were causing a major backlog.

“According to local union leaders and carriers, mail is piling up in offices, unscanned and unsorted,” the report said. “Mail carriers who spoke with The Inquirer said they are overwhelmed, working long hours yet still unable to finish their routes. Offices are so short-staffed that when a carrier is out, a substitute is often not assigned to their route.”

But Dave Partenheimer with the USPS Philadelphia office told Delaware Valley Journal: “The Postal Service remains fully committed to fulfilling our role in the electoral process when public policymakers choose to utilize the mail as a part of their election system, and to delivering Election Mail in a timely manner consistent with our operational standards.”

That came with a minor caveat, however.

Pennsylvania struggled with a new wave of mail-in ballots during the June primary — also during a pandemic and widespread civil unrest — to the point that Gov. Tom Wolf issued an emergency executive order allowing six counties to extend the legal deadline for a mail-in ballot to be collected and counted. Philadelphia, Montgomery and Delaware counties were included in the order.

Democrat Ginny Kerslake and her campaign criticized numerous issues about the June primary after she lost her race for Pennsylvania House Seat 167 against incumbent Kristine Howard.

“I am disappointed that the results for House District 167 were not more in my favor,” Kerslake told the Daily Local.

“However, I am equally disappointed that a reported 1,600 mail-in ballots, postmarked by Election Day but received within one week after Election Day will not be counted. This is because Gov. Wolf did not grant Chester County a waiver for an extension as he did in neighboring Delaware, Montgomery and Philadelphia counties.”

National media outlets have been warning of a “nightmare scenario” in Pennsylvania this fall after many of the state’s primary races weren’t concluded until weeks after Election Day.

“With more states voting by mail due to the pandemic, and with some states having a history of counting these ballots slowly, we might not know who won a state for a week — if not longer,” NBC’s Chuck Todd wrote.

President Trump on Monday ladled out heavy criticism of the service’s readiness.

“The Post Office for many, many years has been, you know, run in a fashion that hasn’t been great — great workers and everything, but they have old equipment, very old equipment,” Trump said. “And I don’t think the Post Office is prepared for a thing like this.”

Critics of the president have argued he is making those remarks in order to sow doubt on the legitimacy of the election should he lose.

Cost-cutting measures put in place by the administration have led other critics to claim Trump is purposefully trying to slow down the USPS so that the election results will be drawn out in some places.

On Tuesday, however, the president tweeted support for voting by mail, but only in Florida.

“Whether you call it Vote by Mail or Absentee Voting, in Florida the election system is Safe and Secure, Tried and True. Florida’s Voting system has been cleaned up (we defeated Democrats attempts at change), so in Florida I encourage all to request a Ballot & Vote by Mail! #MAGA,” he tweeted.

Issues around the Post Office have reached such a fever pitch that the House Oversight Committee will hold a September hearing on “the need for on-time mail delivery during the ongoing pandemic and upcoming election,” according to Chairwoman Rep. Carolyn Maloney (D-N.Y.).