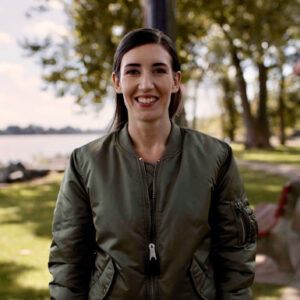 One of the first tests of how public sentiment came in a poll in the First Congressional District race in Bucks County, a seat held by incumbent Republican Rep. Brian Fitzpatrick.

Democratic challenger Ashley Ehasz hopes to capitalize on the anger that has energized many pro-choice voters since the Supreme Court’s decision last Friday. The poll, conducted by Democratic polling firm Global Strategy Group, found Fitzpatrick leads Ehasz by 7 points with 18 percent undecided. However, when voters were told Fitzpatrick “wants to restrict abortion rights, even if the woman’s life is in danger and in most cases of rape and incest,” the results changed to a 10-point lead for Ehasz, a first-time candidate.

“This just echoes the conversations I have had with people at rallies and knocking doors since Friday’s announcement, which is that when voters learn their congressman had the opportunity to protect their right to an abortion and he refused to, they feel betrayed,” said Ehasz. “Fitzpatrick could have voted to codify Roe v. Wade, but instead he washed his hands of it, and sided with the most extreme members of his party. People feel abandoned, and rightly so.”

Not so fast, the Fitzpatrick campaign countered.

“The language in this partisan poll’s script pertaining to Brian’s voting record on abortion is categorically false, and they know it. This push poll is nothing more than a desperate fundraising ploy from a flailing campaign intended to mislead voters in an attempt to make their campaign relevant,”  said Nancy McCarty,  a Fitzpatrick campaign spokesperson.

According to Global Strategy Group, the poll also shows that 44 percent of voters said they disapproved of Fitzpatrick’s job performance while 33 percent approve. That included 40 percent of Republicans approving with 37 percent disapproving.

The pollsters surveyed 626 likely 2022 General Election voters in the First Congressional District on June 24 and 25. The findings have a margin of error of +/-3.9 percent.

“Her poll shows that when people find out Fitzpatrick is pro-life and she is pro-choice, her vote percentage goes up above his. Trouble is, no one knows who she is and that won’t be the only issue that the campaigns will talk about,” Nicholas said. “In addition to having no name ID she also has no money, so she has a hard road in front of her.”

Ehasz graduated from West Point and is an Iraq War veteran. She is a former Apache helicopter pilot and company commander. A Bensalem resident, she left the Army to study for a master’s degree at Oxford University.

Fitzpatrick, a former FBI agent and federal prosecutor, was embedded with U.S. Special Forces as part of Operation Iraqi Freedom.

In the 117th Congress, he was elected co-chair of the bipartisan Problem Solvers Caucus. Fitzpatrick is the ranking member of the House Foreign Affairs Subcommittee on Europe, Energy, the Environment, and Cyber, and he was appointed by House leadership to currently serve on the House Permanent Select Committee on Intelligence (HPSCI) and as a Commissioner on the Commission on Security and Cooperation in Europe, also known as the U.S. Helsinki Commission.

He also serves on the House Transportation and Infrastructure Committee, and co-chairs the bipartisan Addiction and Mental Health Task Force.

In addition to being an attorney, Fitzpatrick is both a  certified public accountant and a certified emergency medical technician.

“As state legislatures across America begin to consider legislation on this extremely sensitive topic in response to today’s Supreme Court decision in Dobbs, I urge all state legislatures to always start from a place of empathy and compassion,” Fitzpatrick said in a statement released after the decision.

“Any legislative consideration must start with the process of seeing the world through other people’s eyes, and walking the world in other people’s shoes. Any legislative consideration must always seek to achieve bipartisan consensus that both respects a woman’s privacy and autonomy, and also respects the sanctity of human life. These principles are not mutually exclusive; both can and must be achieved,” he said.