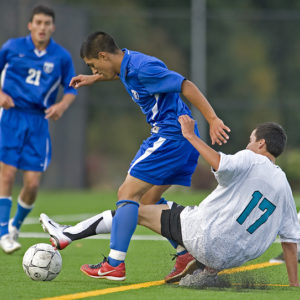 The Pennsylvania Interschool Athletic Association (PIAA) made its case for going forward with fall sports during the coronavirus pandemic to a state Senate committee Tuesday morning.

The group said that fall sports are not only doable but said it would keep students engaged in academics and, in some ways, make them safer.

Despite the fact that the PIAA’s official decision on fall sports won’t come until Friday, their appearance before lawmakers left little doubt it is in favor of getting a fall athletics calendar underway for as many districts as possible.

Many Delaware Valley school districts have yet to finalize their decision on what sports — if any — will be played this fall and are waiting on the PIAA’s vote.

At the same time, the PIAA’s enthusiasm comes as the Chester County Health Department recently updated its guidance that all in-person schooling be delayed until October 9, and currently “does not recommend competition in any sport” until next year.

That recommendation carries weight for Delaware County as well, since the CCHD has been functioning as a surrogate health department there because Delaware County does not have its own — something it is in the process of trying to change.

George School, a private Quaker-based high school in Bucks County, has also announced it will cancel fall sports until at least January. The school is not in the PIAA, however, and mainly plays against other private schools in an independent league.

PIAA Executive Director Dr. Robert Lombardi told the committee that even if fall sports were canceled, a black market of sorts would be created.

“Come fall, if schools are unable to engage in sports, and absent another mandatory shutdown, families and students will not stop playing,” Lombardi said. “They will simply find other outlets. Altering interscholastic athletics will not eliminate the risk, it will simply shift it to another venue that lacks sufficient oversight.”

He then explained that the PIAA had conducted its own random screening of student athletes, finding that out of 30,300 people, 55 failed the prescreening, meaning they exhibited a higher than normal temperature. Out of those 55, 4 students were actually positive — a .013 percent rate.

Meanwhile, Lombardi says the PIAA has been unable to ascertain any research data from the Wolf administration or the state Department of Health showing that interscholastic sports inherently increases the risk of major outbreaks of COIVD-19.

“For that reason, we believe that because of the important benefits that can be derived from participation in interscholastic athletics, we believe that it is at least based on information currently known to us, and the advice we are being provided from many of our schools and our medical advisors, it is worth at least attempting to pursue a fall sports program,” Lombardi said.

Earlier in the month, Gov. Wolf recommended that fall sports be canceled, and no athletic activity resume until January or after. But he emphasized that was only his recommendation and was not a mandate.

Republicans in Harrisburg have been critical of what they say is a lack of data behind Wolf’s recommendation, something that was underscored by Lombardi’s use of the random sampling of 30,000 student athletes.

For the GOP, it adds to a list of other complaints about data: Counties complained about an unreasonable and unfounded metric to move from “yellow” to “green” in May and June;  restaurants said no data was used in drastically scaling back their activity in mid-July; and now school athletics say the recommendation to close sports until January is also lacking empirical data.

“I am hugely of the opinion we need sports,” Murphy said Monday. “It needs to be responsible. And at this point it needs to be outside.”