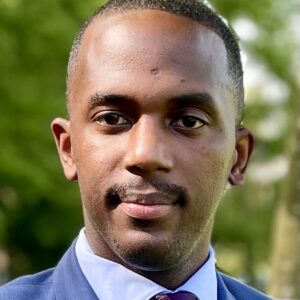 For roughly a decade, Brian Woodard has wanted to become a police officer, encouraged in that ambition by an uncle who works in law enforcement.

But Woodard was confronted with the challenge of providing for his family while making his way through the police academy. Dealing with that challenge might now be a bit easier for the 30-year old father of two, who resides in Philadelphia and works as a security guard in the Phoenixville School District.

Woodard was recently awarded a scholarship to attend the Delaware County Municipal Police Academy and become certified in the Pennsylvania Act 120 training program, which anyone wishing to work as a police officer in Pennsylvania must complete. He will enroll in the academy, which will be held at Delaware County Community College, in July. The curriculum normally requires 22 weeks to complete.

Woodard was selected by a committee that included Chester County Sheriff Fredda Maddox and Chief Deputy Sheriff Kevin Dykes. He is the second person of color to be awarded a scholarship to the academy this year. Two more scholarships are expected to be awarded in 2022.

“The past 10 years I’ve been doing armed security,” Woodard said, “and I’ve always wanted to take that next step. Once I reached that tender age of 30 years old, I wanted to see what I could do to better myself, better my family and better my community. And what better way of doing that than becoming a police officer.”

Woodard, who graduated from Franklin Learning Center in Philadelphia, says the scholarship will ease the strain on his family.

“It helps out tremendously,” he said. “Going into the police academy was probably going to be the number-one stress factor I would have to deal with, not only continuing to provide for my family, but paying for the tuition. (The scholarship) just made it so much easier. In a sense, I can just breathe and not have to worry about the financial part. I can just worry about everything else that comes with it. The bookwork, the physiology of it, and everything else.  It’s one big stress factor off me. It’s a Godsend.”

Maddox, who had a long career as a Pennsylvania state trooper and an attorney before belong elected sheriff in 2019, noted the difficulty of getting individuals to consider a law enforcement career, regardless of their ethnicity. But she says people of color may be discouraged from seeking a career in the field in the wake of recent events.

“Sometimes the images that you see in the media perhaps paint this broad, negative image of law enforcement,” she said. “And then with everything happening right now with the civil unrest, you had the whole incident with George Floyd, and others, the connotation is like ‘No, I don’t want to be a police officer.’

“In addition, African-Americans don’t really have that one-on-one conversation with local enforcement. So, the mentality is to avoid law enforcement at any cost. So, that’s not necessarily a profession that (a person of color) is going to pursue.”

For his part, Woodard envisions being a part of the law enforcement profession and also his community.

“I think it’s about just building that bridge between both communities,” he said. “I feel as though I would be perfect in doing so. I feel like it gives us a chance to actually listen to one another and hear each other that, me being an African-American within the law enforcement community; I feel like it’s almost a match made in heaven for me to speak for the community and the community in an authority role.”