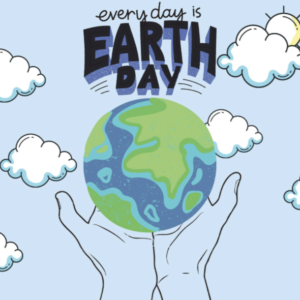 Point: This Earth Day, We’re Demanding a Livable Planet for All

Editor’s Note: For another viewpoint, see Counterpoint: To ‘Restore the Earth,’ Tap the Free Market

2020 was the year that the climate crisis came to my doorstep — again. Just eight years after my parents’ home was destroyed by Superstorm Sandy, record-breaking wildfires swept through the West, claiming homes, lives, and even an entire town. For one terrifying day, my sky turned orange; for weeks afterward, my family and I and millions of others breathed smoky, unhealthy air.

We were far from alone. From Australia, to Honduras, to Iowa and the Gulf Coast, 2020 brought climate disasters to communities around the world, including those that have already been pummeled by storms made fiercer by climate change. It’s clearer than ever that we must take immediate action to prevent the climate crisis from getting even worse.

Earth Day isn’t the only day we should spend working to make that happen, of course. But it’s a useful ritual that can draw everyone’s attention back to an issue that can seem too overwhelming to even think about. It’s an opportunity to set aside the voice that says, “I’ll deal with that tomorrow,” and consider what we can do to protect our shared home for ourselves, our kids, and future generations — right now.

We’ve suffered through years of escalating crises. How about we make 2021 the year of starting to solve our biggest problems — at the pace and scale that’s needed? This year offers the best opportunity we’ve had in years — maybe ever — to pass meaningful climate legislation. With allies in Congress and the White House and a rapidly approaching deadline to stave off the worst effects of climate change, it’s time for an all-out mobilization that meets the crises our country faces at the speed and scope we need.

We have no more time for limited, piecemeal action. According to a 2018 report from the Intergovernmental Panel on Climate Change, getting us off track for catastrophic levels of warming will require “rapid, far-reaching and unprecedented changes in all aspects of society” over the next nine years. In that time, we’ll need to transform how we generate energy, how we get around, how we grow food, and much else.

We don’t have the luxury of tackling the climate crisis in isolation, either. Millions of Americans remain out of work because of the COVID-19 pandemic. Racial injustice remains a deep and continuing crisis for communities of color — and one of the ways it manifests is in disproportionate exposure to toxic air and water and climate disasters. We need solutions as big and as interconnected as the problems we face.

The THRIVE Act, which will be introduced to Congress this month, is a roadmap out of our country’s crises. It would invest $1 trillion a year for a decade to create over 15 million family-sustaining jobs — enough to end the unemployment crisis — while cutting climate pollution nearly in half by 2030 and cleaning up pollution in communities of color. It would invest in sectors across our economy, like clean manufacturing, clean energy, and transportation, upgrading infrastructure and buildings, protecting our lands, regenerative agriculture, and care for children and the elderly, with at least half of the investments going to the communities on the frontlines of the climate crisis. All of these jobs would include strong wage and benefit guarantees, access to unions, and equitable hiring practices that recruit women and people of color.

The THRIVE Act already has support from a broad coalition of unions, environmental organizations, racial justice groups, faith groups, and cultural institutions. Its roots are in plans created by grassroots environmental justice organizations, which serve those most affected by pollution, and its central provisions are popular with voters across the country.

But to turn THRIVE into a reality, we’ll have to do more to build a multiracial, cross-class coalition powerful enough to push it through Congress. That’s another reason to return to the spirit of the original Earth Day, which was largely organized by people with ties to the civil rights movement. They saw environmentalism as one part of a larger struggle for justice. As Denis Hayes, coordinator of the original Earth Day celebration put it, their “goal is not to clean the air while leaving slums and ghettos, nor is it to provide a healthy world for racial oppression and war.”

This Earth Day, let’s remember that all our struggles are connected. If we want to build a better world, we’ll need to take action to solve the climate crisis and ensure that everyone has access to a healthy environment — and we’ll need to fight for economic opportunity and freedom from racial inequality. When we come together across lines of race, class, and geography to fight for solutions as large as the issues we face, there’s no limit to what we can win. This is our moment to create a livable future for all. We have no time to waste.

Michael Brune is executive director of the Sierra Club. He wrote this for InsideSources.com.