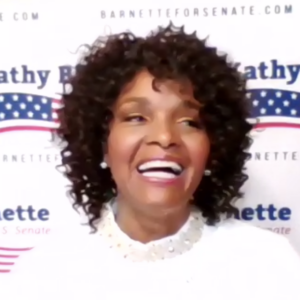 In a no-holds-barred interview, conservative activist and former U.S. Senate candidate Kathy Barnette says “The Swamp” isn’t just Democrats, and she calls out her fellow Republicans over their treatment of her during the primary.

“If we want to talk about election integrity, we have to go beyond just voter IDs and getting rid of no-excuse mail-in ballots. We also have to take a very strong look at partisan journalism,”  Barnett said. “In the last five days, we had a number of those who are allegedly conservative pulling out the long knives.”

“I’m like the woman who just gave birth to a nine-pound baby,” Barnette said. ” I’m not thinking about having any more babies. Let’s just wait and see what happens.”

Hosted by Michael Graham of InsideSources.