PODCAST: F&M Poll Reveals That Things Still Up in The Air as GOP Primary Nears

In a podcast interview with DVJournal, Berwood Yost, director of the college’s Center for Opinion Research, said one thing that surprised him was the decline in “the trust and confidence that citizens have” in the election process.

The F&M Poll asked that question before the 2020 election and 75 percent of people said they were satisfied with the “rules and procedures.” Most of those who were dissatisfied complained about a lack of ballot access, Yost said, not concerns about ballot security.

But now, “You have 52 percent saying they are dissatisfied with the rules or procedures that guide elections.”

“And it’s pretty partisan,” he said, with only 8 percent of Democrats that were polled dissatisfied. Republicans want to see voter ID, elimination of mail-in balloting and drop-boxes, “and basically, preventing voter fraud.”

Also, 64 percent of voters support having open primaries, instead of the closed primaries for party members only in place now.

Asked about the large number of Republican voters who are undecided over the Senate and governor’s race, Yost said it is not unusual in primaries where the candidates tend to have similar views on the issues.

Yost also noted the messages in the barrage of attack ads between Dr. Mehmet Oz and Dave McCormick in the Senate primary.

“If you watch the commercials in the Senate Republican Senate race, it looks like there are two liberals running against each other, right? It’s almost like the ‘Twilight Zone.’ And so I think that, that there’s been a lot of confusion created by all that advertising…We have not seen a clear leader emerge in probably either gubernatorial primary, either gubernatorial or Senate primary on the Republican side. Those candidates haven’t separated themselves.”

For the Democrats running for Senate, Lt. Gov. John Fetterman was the clear leader at 53 percent, followed by Congressman Conor Lamb with 14 percent. The remaining 22 percent of Democrats were undecided.

Only one Democrat, Attorney General Josh Shapiro, is running for governor; but among the nine Republicans, 20 percent picked state Sen. Doug Mastriano. Bill McSwain was at 12 percent, Lou Barletta at 11 percent, and Dave White at 8 percent. The real leader, at 34 percent, was “undecided.

The poll revealed more bad news for the president in Pennsylvania as well. Asked about their personal finances and whether they feel better or worse off, the trend since March 2021 when Biden took office, has continued to move steadily downward. 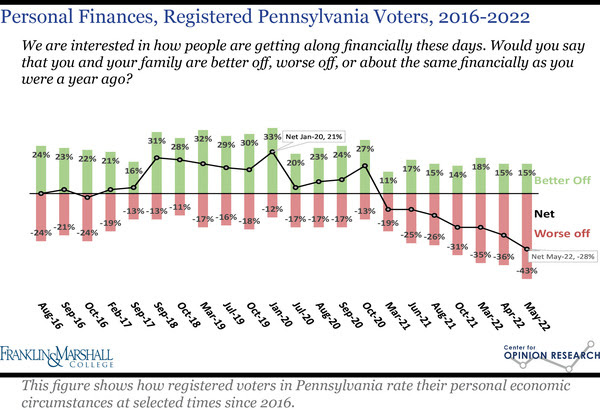 “These midterm races are always about the party in power and their performance,” Yost said, “I think we’re going to hear a lot about President Biden in the general election campaign.”