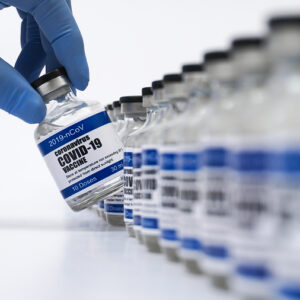 During his remarks, he mentioned that in mid-February he had “toured the Vaccine Research Center at the National Institutes of Health . . . [where] I met world-class doctors, scientists, and researchers who were critical for discovering the vaccines in record time.”

Frankly, the president is giving the government too much credit. While federal grants and purchase agreements certainly helped accelerate vaccine production — by essentially helping companies scale up manufacturing capacity even before they knew whether their vaccine candidates would succeed in clinical trials — the actual research was overwhelmingly performed and funded by the private sector. Pfizer invested $2 billion of its own capital to research and develop its shots; other drug companies have invested billions more. That capital, of course, comes from revenue generated by previous drug sales, or from investors willing to take a risk on a small, revenue-less biotech’s promising but unproven medicine.

It’s tough to chalk the president’s misstatement up to a mere gaffe. His administration is pushing for heavy-handed price controls, which would sap the private sector’s enthusiasm for investing in biotech. Only ideologues who truly believe that the government — not private companies — drives drug development would put forth such disastrous proposals.

Price control proponents typically highlight federal research spending, arguing that if the government helps pay for the research, it deserves a role in setting drug prices.

And it’s true that the federal government spends billions — about $43 billion in 2018, to be precise — on research at NIH and university labs.

The overwhelming majority of these federal grants fund basic research, helping scientists answer questions like “is this genetic mutation benign or harmful?” or “how does the immune system react to this protein?”

To be clear, that basic research is valuable. But any resulting discoveries often lack immediate, clear medical applications. The COVID-19 vaccines, for instance, are based on numerous discoveries dating all the way back to the 1960s.

The federal government isn’t temperamentally equipped to play this role. Politicians and taxpayers would never tolerate spending billions of dollars on R&D projects that are mostly doomed to fail. Of every 5,000 drug molecules examined in the lab, only one ever makes it through animal testing, clinical trials, and the regulatory approval process to win the FDA’s green light. Despite this staggering failure rate, firms collectively invested $129 billion in medical and health R&D in the United States in 2018. Investors understand the long odds — but calculate that the potential rewards from developing a blockbuster drug justify the risks.

That calculus would surely change if the government arbitrarily capped prices, as Biden and other members of his party advocate. A slate of proposals — from the across-the-board price controls contained in H.R. 3 to the perennial calls to let Medicare bureaucrats set prices — would slash biotech companies’ revenues and limit their potential profits. Investors’ capital would flow out of the medical research sector into other industries that offer less risk and better returns.

That’s exactly what has happened in Europe over the past few decades. In the 1970s, European scientists developed more than half of all drugs worldwide. But as continental politicians ramped up price controls, scientific talent and investor capital migrated to America. Now, U.S. labs develop over half of all drugs.

Just imagine how much worse the COVID-19 situation would be right now if America didn’t have such an innovative biotech sector. Schools closed for years on end. Lockdowns forever.