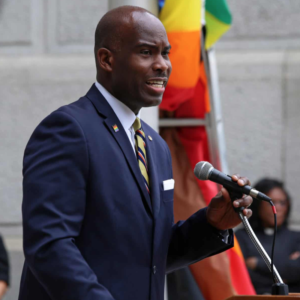 While some members of the Philadelphia City Council have been publicly opposing additional police funding, they’ve been privately receiving extra police security amid the sometimes violent reaction to the George Floyd killing.

Fourteen of Philadelphia’s 17 city councilors sent a letter to Mayor Jim Kenney announcing they would not support his proposed $14 million increase to the police budget for Fiscal year 2021.

“The Police Department — along with the policing profession nationally — faces a crisis of legitimacy,” the letter reads in part. One of the signers is City Councilman Derek Green, who confirmed to Delaware Valley Journal on Wednesday that he had received the enhanced police security.

“I then received a call that there would be an officer outside my house,” Green continued. “It was not a decision that I made, so I wasn’t fully knowledgeable about the length of time” that the extra security was provided.

Green said he does not know where the decision was made, whether inside the Philadelphia Police Department or at City Hall.

“From my perspective, it was not [coming] from city council,” Green said.

News of the additional police security was first reported at BigTrial.net.

The Philadelphia Police Department also did not say who made the decision to send the additional security to councilors’ homes.

“Some city officials have received additional personal protection,” the department’s public affairs office told Delaware Valley Journal in an email. “This is being done out of an abundance of caution. Because this is a security matter, we are unable at this time to provide more specifics.”

Philadelphia suffered some of the worst rioting and looting that followed in the wake of protests over Floyd’s death at the hands of a Minneapolis police officer.

According to authorities, 378 fires were set in the city and 246 commercial burglaries were committed during the unrest. At least 13 police officers were injured and 14 people arrested in a single day of the week-long protests.

A similar controversy has boiled up in Los Angeles this week.

“While LA City Council President Nury Martinez was filing a motion last week seeking to cut $150 million from the LAPD budget, she had an LAPD unit standing watch outside her home providing her family with a private security detail since April,” Spectrum News 1 reported.

“It’s kind of ironic. Here she is demanding $150 million be reallocated from the police budget, but yet she has security at her house by the Los Angeles Police Department,” the LAPD’s union director Det. Jamie McBride, told the outlet.