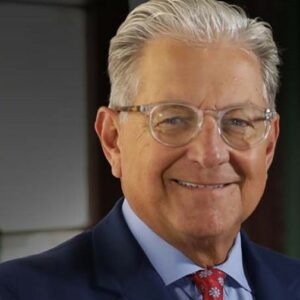 Philadelphia lawyer George Bochetto, who was the Pennsylvania Boxing Commissioner from 1995 to 2002, did not pull any punches against his opponents during a recent interview about his decision to enter the crowded GOP U.S. Senate primary race.

The well-known local attorney is joining a field that includes a celebrity doctor, a former ambassador, a wealthy hedge fund executive, a Montgomery County businessman, and a Fox News commentator—and that’s just on the Republican side. Another large group has also lined up seeking the Democratic nomination.

Bochetto is putting up $1 million of his own money to launch his campaign. He says he will have enough money to “get my message out.”

“I don’t need to raise $30 million to run a primary campaign,” he said. “And if Oz and (David) McCormick and (Carla) Sands think they can just buy the election, they ought to go talk to Mike Bloomberg.”

Bloomberg, one of the wealthiest men in America, spent millions in a failed bid to win the Democratic presidential primary in 2020.

Bochetto most recently garnered headlines for his defense in court of Philadelphia’s Christopher Columbus statue from those would like to tear it down. He said one reason he is running is to prevent the country from falling to left-wing “woke” mobs.

“I’m all for an Indigenous People’s Day but not canceling Christopher Columbus Day to do it,” said Bochetto. “Why can’t we do both? We have St. Paddy’s Day.”

“I’m running to stand up to these crazy movements that are really tearing down the values and the cultures of our country,” he said.

“The woke mob and the left are truly taking this country on a disastrous course,” said Bochetto. For example, “The murder rates are sky high. We have George Soros-backed DAs who refuse to carry out their oaths of office.”

And since President Joe Biden took office, inflation has gotten out of control.

“If we can get a Republican-controlled Senate we can start passing sensible legislation as a group,” he said. “We can start rejecting all these inflationary spending policies that the Biden administration and the Democrats are currently engaged in. Their solution to how to pay for $3.5 trillion in giveaways is to just print more money. Printing more money is highly inflationary. Paying people to stay home instead of working is highly counterproductive, highly inflationary. These are policies that must be rejected,” Bochetto said.

“And we’re only going to reject them if we elect people like myself to go to Washington and take control of the situation and make sure our fundamental values and our fundamental principles of American government are implemented.”

Asked about foreign policy, Bochetto said, “China absolutely represents the greatest existential threat to the United States. And we cannot be electing anybody to the Senate from Pennsylvania who is business partner with the Chinese Communist Party,” (a swipe at McCormick, who has been CEO of Bridgewater Associates, which has investments in Chinese businesses).

Temple University Professor Robin Kolodny, who chairs the political science department, said the large field of candidates with no decisive frontrunner tends to draw more people into the fray.

“As of now, our window for candidates to file petitions to get on the ballot (2,000 signatures) opens on February 15 and closes March 8,” she said. “It is one thing to put out a press release saying you are running.  It is another thing to have all the paperwork in by March 8. Candidates who do not win a major party nomination will still be able to petition to get on the ballot for November as an independent.”

A December poll found Oz 10 points ahead of Fox News commentator Kathy Barnette, who was in second place. However, that poll, by the Trafalgar Group, showed nearly 51 percent of Republican primary voters were undecided.

Kolodny pointed out the last time Republican voters nominated a celebrity it did not end well in the general election. That was in 2006, when Ed Rendell beat Pittsburgh Steelers football legend Lynn Swan and was re-elected governor, with 60 percent of the vote to Swan’s 40 percent.

“Here’s the issue with non-political celebrities: Are those who know them also consistent voters?  It turned out not to be that way for Lynn Swann who invested heavily in advertising on ESPN,” said Kolodny.

“Having grown up in the Philadelphia legal community and surrounded, as a child, by legendary lawyers (including my own father Ted Flowers), I have an instinctual sense of what greatness in the profession means,” Flowers said. “To me, there are very few living Philadelphia attorneys who are worthy of the title ‘Philadelphia Lawyer’ in the tradition of Andrew Hamilton, but I have no hesitation in saying that George Bochetto is one of them.

“He took on the City of Philadelphia with its bigoted crusade to silence the Italian American community and rob us of our history, in Columbus,” said Flowers. “He took on all of those who believe that certain cultures and communities can be silenced, at a time when silencing is a popular tactic. And he has been extremely successful. George Bochetto is everything a Philadelphia lawyer should be, and once was.”