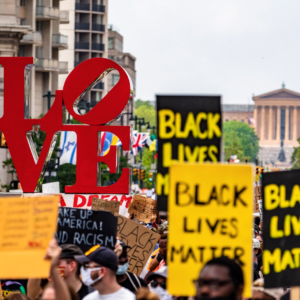 After weeks of warnings about the extreme health risk posed by COVID-19 and ordering residents to avoid gatherings no larger than 10 people, the Philadelphia Department of Public Health is now celebrating a massive protest featuring several thousand people thronging together on Philly streets.

For some, it brought to mind the now-infamous images of Philadelphians gathering for a September war parade during the height of the 1918 Spanish Flu pandemic.

Yet over the weekend, the department retweeted aerial footage of Saturday’s George Floyd protests showing thousands upon thousands marching in close proximity to one another with the department this time adding: “Philly showed up and showed out!!!!” 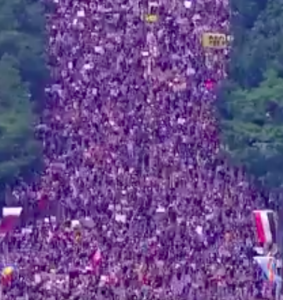 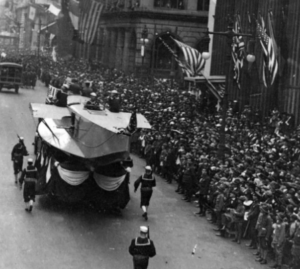 “This deadly example shows the benefit of canceling mass gatherings and employing social distancing measures during pandemics,” the CDC said.

In the last two months Philadelphia’s Department of Public Heath used their Twitter account to instruct citizens on how to report people violating social distancing by playing basketball or congregating in a park.

Now the same department that warned against grieving families holding even small funerals (“there are still ways for people to gather virtually to mourn and to memorialize loved ones,” their guidance reads) is celebrating as thousands gather in the streets during the COVID-19 pandemic.

A spokesman with the department told Delaware Valley Journal they see a crucial distinction between the two sets of tweets.

“The [parade] tweet you reference was posted after the city moved to the Safer at Home, or yellow, phase. The two tweets from earlier were during the Stay at Home, or red, phase, and it was encouraged for folks to contact 311 to report gatherings outdoors (311 closes at night, and the responsibility for collecting those reports fell to the 911 call center),” the department’s James Garrow said in an email.

Garrow also said the department is monitoring for a possible spike in cases.

“Given that the first protests were more than a week ago, if there is a spike in cases, we should start seeing it now. Our recommendation is that everyone who is in or around a large crowd stay at home for 14 days and monitor for symptoms and get tested seven days after their last time out.”

The department would not affirm that the weekend’s rallies were against their own current social distancing policies, only saying “We were encouraged to see so many protesters wearing masks and taking other precautions during protests this weekend.”

Even with the swells of protestors over the weekend, the Pennsylvania Emergency Management Agency Council voted on Monday to renew Gov. Wolf’s emergency declaration for COVID-19. One Delaware Valley lawmaker on the panel, Rep. Steve Barrar (R-Chester/Delaware) voted not to renew.

“Residents have demonstrated their understanding of the virus threat and willingness to wear masks and take other safety precautions,” Barrar said in a statement. “Businesses are also changing how they operate. I believe it will do more harm than good to continue to restrict them.”

In the Delaware Valley, Montgomery County Commission Chairwoman — and physician — Valerie Arkoosh faces similar questions after participating in a protest in Souderton, PA following weeks of advocating for strict adherence to stay-at-home edicts.

Asked about violating the quarantine orders as both a public official and a doctor, Arkoosh said she has “many roles.”

“I really did think for quite a bit about whether or not I should go,” Arkoosh said in a streaming news conference. “But I thought, as the leader of this county, it was important when invited to come stand with the community under the circumstances of this protest. That it is also part of my job, to be there when the community calls… when there is such a profound and deep need for coming together.

“People can call me whatever they want, but I will always stand with people in our community when they ask me to stand with them,” she added later. “I think that is as much a part of my job as anything else that I do everyday.”

Other elected officials have also struggled to explain why they decided to set the coronavirus rules and regulations to the side.

When Gov. Tom Wolf marched with hundreds of protesters in Harrisburg last Wednesday, he “seemingly violated his own coronavirus reopening orders on Wednesday,” a story from PennLive.com noted.

Wolf later admitted there wasn’t a logical consistency, calling his marching in Harrisburg “a real gamble.”

That wasn’t good enough for Philadelphia resident Lawrence Tabas, who is also chair of the Pennsylvania GOP.

“As a Philadelphia resident, it’s disconcerting to see the Philadelphia Public Health Office encourage an outdoor gathering while at the same time refusing to allow businesses to reopen,” Tabas told Delaware Valley Journal. “The First Amendment is sacred, and the ability to protest should never be infringed — but these protests are in direct violation of the Governor’s order, which he himself broke publicly just a few days ago. It’s past time for the Governor to apply consistency to his directives and reopen the entire Commonwealth.”