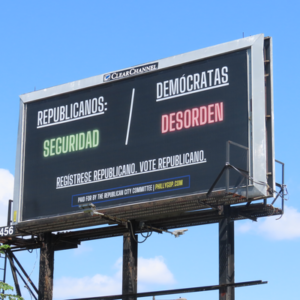 The Philadelphia GOP is building on its growing success among the state’s Hispanic voters by launching an ad campaign targeting a demographic long considered a hardened part of the Democratic coalition.

In last year’s election, former President Donald Trump earned the highest share of minority votes nationwide for a Republican in 60 years. In fact, more than one-quarter of Trump’s support in 2020 came from non-White voters. In Pennsylvania, Trump got 27 percent of the Hispanic vote, according to exit polls.

Now the Philadelphia GOP has launched a billboard advertising campaign hoping to grow those numbers even more.

“The Philadelphia Republican Party is a big-tent party, and we are witnessing what other Republicans across the country are seeing as well: Spanish-speaking voters fleeing the disorder and economic illiteracy that they rightly associate with the Democratic Party,” said Martina White, chair of the Philadelphia GOP. “As of today, with the announcement of a two-pronged billboard campaign in the heart of Spanish North Philadelphia, the Democrats are on notice that they can no longer take Hispanic voters for granted — and that we are giving these voters an alternative and competing for their support.”

In the U.S., four in five Latinos are U.S. citizens, according to the Pew Research Center. And in Pennsylvania, 521,000 out of 9.7 million voters are Hispanic. However, California, Texas, Florida, New York, and Arizona have the largest Latino populations.

In an interview with the Delaware Valley Journal, White made it clear Latinos are an important demographic to the Republican Party.

Many Hispanic people have escaped from socialist countries and know first-hand the poverty and misery that form of government brings, she said.

“We already have some Spanish-speaking and Hispanic members of the party and we realize after 2020, there’s certainly a larger section of the city we would like to engage with and make sure they feel welcome. And we want to make sure they know that we care about their community. And by electing Republicans, their voices are stronger because we have a lot of shared values that are reflective of their culture. They are hardworking people. We certainly want to embrace them.”

“Many of the immigrant families escaped from places socialist in nature and are seeking freedom here in America,” she added. “And we want to make sure that they know that Republican values are what leads to prosperity.”

“The progressive policies are not working in our city and I think that impact on that community has been significant, as well,” she said.  “They want safety and security. They don’t want disorder.”

One of the billboards is already up in north Philadelphia and they hope to place another one in Kensington, said White, who is also a state representative. “Spanish-speaking voters in Philadelphia have seen the reality of Democratic rule, and they don’t like it.”

The GOP has been asking its members to help fund the billboards and to help them to stay up longer, White said.

While the trend is positive, the party is still far behind the Democrats.

“I think that’s going to be hard,” 74-year-old Rose Rivera said of the GOP’s efforts. Rivera, a Philly resident who came here from Puerto Rico when she was 18, added her experience is Trump has made the GOP’s job harder, not easier. “A lot of people were Republicans before (former President) Trump. Since Trump came through, everything he did to Latino people, people changed from Republican to Democrat including me, everyone I know, my whole family.”