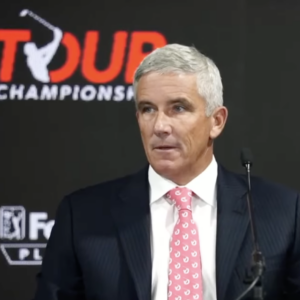 What’s the golf version of an “own goal?”

When PGA Tour commissioner Jay Monahan unveiled the Tour’s new, golfer-friendly package of pay and perks at a press conference last week, it was a tacit admission that the pros who are playing LIV Golf tournaments had a point: The PGA was not taking care of the players, who are responsible for the Tour’s success.

Now the PGA is doubling the bonus pool for its Player Impact Program to $100 million, and it is helping lower-ranked players by guaranteeing earnings of $500,000 and a travel stipend for each missed cut. With annual revenue of $1.5 billion, the PGA can afford it.

But what it won’t do, apparently, is give up its attempt to maintain a monopoly on the sport. Asked at that same press conference if LIV golfers pleased by the new player-friendly approach were welcome to return to the PGA Tour, Monahan had a one-word answer.

Under Monahan, the PGA has been embroiled in controversy and with no end in sight. His ham-fisted response to LIV Golf led to an ongoing investigation by the Department of Justice over potentially anticompetitive practices. And nine golfers, including superstars Phil Mickelson and Bryson DeChambeau, have filed their own antitrust lawsuit against the Tour, alleging it is using its monopoly power to cause harm to pro golfers and illegally thwart a competitor.

At issue is whether the PGA Tour–which is exempt from paying federal taxes because it purports to be a business league that exists to promote the interests of professional golfers–violated federal antitrust laws by suspending more than 20 of its members for playing in non-Tour sanctioned tournaments of its rival, LIV Golf.

Being simultaneously investigated by the Justice Department and sued by the very athletes you are supposed to represent is not a good look for an alleged non-profit created to allegedly protect its members. The Tour is not helping by publicly questioning the “loyalty” of its own members or waging what some have called a mafia-style intimidation campaign against the players it has blacklisted.

While the antitrust lawsuit will not go to trial until early 2024, American taxpayers should demand the federal government take action against the PGA Tour, an organization that has abused its non-profit status in order to protect its own monopoly power and pad its profits for decades.

For nearly half a century, the PGA Tour was the only game in town for pro golfers in the U.S., forcing them to abide by the Tour’s business model or go sell insurance for a living. That was, until LIV Golf came along. The Greg Norman-led Saudi-backed tour has completely turned professional golf on its head, offering players financial security via no-cut, guaranteed money events.

Viewed from the players’ perspective, the arrival of LIV Golf is a win-win. It allows the game’s biggest stars to maximize their earning potential via bigger-purse, guaranteed money events. At the same time, it creates more playing opportunities for lower-ranked golfers on the PGA Tour, while infusing more prize money into the game. A non-profit truly committed to the well-being of its members would welcome LIV’s arrival.

Not the PGA Tour. It sees LIV Golf as a threat to both its profitability and total monopoly over the professional game. The Tour said as much in a recent memo to players, writing it was in the Tour’s “best interest” to deny the requests of its members to play in the inaugural LIV Golf event in London in June because doing so “would harm the Tour” and its sponsors.

Which brings us back to why both the DOJ and suspended players have taken action. On one level, the Tour is exempt from paying taxes so it can promote the interests of its members, a power the Tour has grossly abused when it then suspends those members for wanting to play in golf tournaments that offer more prize money than PGA Tour events.

On another level, the DOJ is investigating whether those player suspensions amount to the Tour wielding its monopoly power to unlawfully crush a competitor, which is both a violation of federal antitrust laws and an example of anticompetitive behavior that infringes on players’ rights as independent contractors.

And the players are standing up for themselves, arguing in their lawsuit that as independent contractors, they should have the freedom to maximize their value and earning potential by playing in a PGA Tour event one week and a LIV Golf event the next.

Through a mix of greed and hubris, the PGA Tour believes it is entitled to be the sole organizer of professional golf in the United States and that it has the right to suspend golfers it deems disloyal for playing in someone else’s golf tournament. That attitude is disrespectful to the Tour’s members at best, and a violation of federal law at worst. The players who have brought the lawsuit against the tour should be commended for sticking up for their rights, and the Justice Department should be applauded for its investigation into the PGA Tour’s anticompetitive business practices.

It is time for Congress and the IRS to do the same.