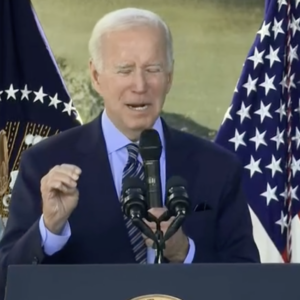 In a desperate Hail Mary attempt to deflect blame for high energy prices, President Biden ratcheted up his war of words on the American energy industry ahead of midterms. Once again, he threatened American producers with even more taxes, this time with a disastrous Windfall Profits Tax. Larry Summers, top Democrat economist and former advisor to Presidents Clinton and Obama said it best: “If you reduce profitability, you will discourage investment which is the opposite of our objective.”

We have seen this movie before, and it doesn’t end well. Another fellow Democrat and predecessor, President Jimmy Carter, made the same failed attempt in the 1980s, and the American economy suffered immensely. On Tuesday, Pennsylvanians have an opportunity to send Republicans like Dr. Mehmet Oz to Congress to stop Biden’s destructive energy policies and restore American energy independence.

The American people are paying the price each day for bad energy policies, as high energy costs fuel inflation and raise prices on gas, groceries and home heating bills. High energy costs are driven by lack of supply, and the Biden administration has worked to limit the supply of fossil fuels at every turn from canceling the Keystone Pipeline and drilling leases to slow walking permits.

The President and his climate cabinet have discouraged investment in fossil fuels, as recently as last week when he spoke about coal, saying he would be “shutting these plants down all across America and having wind and solar.” If Biden makes good on that stunning promise, energy prices will skyrocket even further because the reality is that today wind and solar only make up about 12 percent of the nation’s electricity generation. The rest must come from baseload natural gas, coal and nuclear.

Pennsylvania is blessed with enormous energy resources as the second-largest natural gas producer after my home state of Texas and can play a leading role in driving up production and lowering costs. This means jobs, capital investment in communities and lower bills. As the former Governor of Texas, I have seen how good a booming energy industry can be for local economic development. And as Secretary of Energy, I pushed for the further development of the Appalachian region’s resources, because America should have multiple hubs of natural gas development to make our national system more resilient.

In 1979, President Jimmy Carter announced he would lift the admittedly self-destructive price controls on domestic oil only to replace them with calls for a Windfall Profits Tax. In 1980, he got his wish, and American oil production began to plummet. It’s no mystery why this happened, and as former chief executive of the world’s 12th largest economy, Texas, there are three simple tenets of supply-side growth that I’ll impart to President Biden.

First, don’t over-regulate. This is exactly what the price controls did, and even Jimmy Carter said they “hold down our own production.” Second, don’t over-litigate. A nation of builders can never build if they’re constantly tied up in legal battles over largely bogus environmental allegations. The woke climate activists have only made this immeasurably worse. Third, don’t over-tax. This is what Jimmy Carter and Joe Biden have most in common, beyond destroying American energy independence, of course.

When oil production goes down, the American economy doesn’t stop and wait for levels to rise; it imports the deficit. This is exactly what happened under Carter. Oil imports skyrocketed because they weren’t exposed to the same tax. Effectively, Jimmy Carter created an incentive for America to become import-dependent rather than energy increasingly energy independent. The tax was so devastating that Congress voted to repeal it 2 and a half years before it was due to expire. It’s simple, a tax on production is always viewed as an increase in operating costs by any profit-maximizing company – that’s every company in America.

American oil production is already 1.2 million barrels below its 2019 peak when I was Secretary of Energy. At the same time, American producers, under President Biden’s war on American energy, are less responsive to price incentives given current profits; imagine the outcome if President Biden goes full Jimmy Carter.

The American people don’t want to return to the crippling dependence of relying on foreign oil. They want to be a nation of builders and providers of energy security to the world. They know we can do it because just two years ago, America was the world’s largest swing producer, capable of balancing markets and leveling consumer costs.

Under President Biden’s recycled Carter-economics Americans will be left out in the cold as foreign nations and oil cartels dictate American prosperity, and inflation suppresses the American dream. On Saturday, John Fetterman stood with Presidents Biden and Obama asking Pennsylvanians for their vote. Pennsylvanians have a choice between sticking with Biden’s radical energy policies or electing a Congress who can restore American energy independence. I urge you to vote for the prosperity of the Keystone State and choose Mehmet Oz.

Rick Perry is the former Governor of Texas and the 14th Secretary of Energy. He wrote this for InsideSources.com.