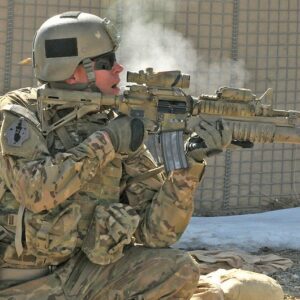 As a retired Army combat veteran who served a tour of duty in Afghanistan, I have very strong feelings regarding the current situation unfolding in Afghanistan and President Joe Biden’s handling of it.

President Joe Biden has clearly failed the American people and the citizens of Afghanistan. His withdrawal of troops is nothing short of negligence and incompetence. His order to withdraw troops prior to evacuating U.S. citizens and allies who are now vulnerable and trapped in enemy-controlled areas is unconscionable.

Combat commanders should have known who was operating non-governmental organizations (NGOs) in their area of operation, and they should have had plans in place to evacuate them in case of instability or threat of Taliban occupation. The fact that civilians and allies cannot get through the crowds at the Kabul airport, and we are not going out into the community to retrieve those stranded civilians, is a military failure—we never leave a soldier behind, and we never leave a U.S. citizen behind!

This administration’s avoidance of correctly identifying the situation is propelling the U.S. into a situation from which we cannot recover. The Aug. 31 deadline for U.S. troops to leave is fast approaching and Americans are still stranded throughout the country of Afghanistan. Afghan allies are desperate to get out as they know what they face if the Taliban find them.

To be clear, the Taliban will not only fly their flag on the U.S. embassy on 9/11, but they will rape, torture, sell into slavery, and murder any U.S. citizens or allies left behind that they can find. President Biden has abandoned U.S. citizens and allies who desperately need our help, and they need it now.

The time for redirect is long past—THE TIME TO ACT IS NOW! We need to send in the special forces to retrieve our fellow citizens! We also need to get our allies out, as they worked side by side with us every day and deserve the promise of a future we gave them.

We need to destroy every military base we left behind so our technologically advanced equipment does not fall into the hands of the enemy. We need to burn every poppy field to fight the war on drugs at the source.

And, finally, we need to tell the American veterans who served in Afghanistan, and the gold star families who lost their loved ones in Afghanistan, that you, Mr. President, were wrong. You are the sole person responsible for this surrender and any and every death of a U.S. citizen is on you. Your failure as a leader has caused the loss of lives and faith in the U.S. as a world leader. Soldiers did not lose this war – suits did, and, Mr. President, that is you!