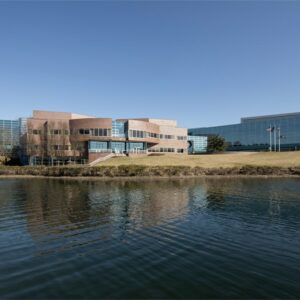 The Discovery Labs of King of Prussia now boasts another major research and development organization within its growing “Cellicon Valley.” The innovation hub announced a multi-year lease with the University of Pennsylvania’s Gene Therapy Program, a cutting-edge research and development organization, last month. It will focus its endeavors in Montgomery County on the development of medicine for rare and orphan diseases and treatments for contagious pathogens such as COVID-19.

Currently located in the University City neighborhood of Philadelphia, the Gene Therapy Program has outgrown its space at Penn’s Translational Research Center. It’s located in an area where space is at a premium. Rather than pay University City real estate’s steep prices—which have remained resilient amid the pandemic—or commission new construction, Director James M. Wilson, M.D., Ph.D., has decided to expand outward. The space at the Discovery Lab, formerly occupied by pharmaceutical giant GSK, provides the necessary infrastructure and size to house an expanding and technologically advanced research and development (R&D) program,

“The past few years have been a pivotal time in the development of gene therapies, and our new space at Discovery Labs will propel us even further in charting the future of the field,” Wilson said. “With additional state-of-the-art equipment and increased operational capabilities, we are well-positioned to enhance the design and execution of our innovative, transformative therapies.”

Largely driven by the lack of research and drug development dedicated to patients with rare, inherited diseases, the Gene Therapy Program has been at the forefront of research into Adeno-Associated Virus (AAV) Vectors. AAVs are largely benign viruses that have proven modifiable by gene therapy. By reconstructing or repairing the genetic material within the viruses, scientists have been able to produce therapeutic effects in patients with rare, genetic diseases. Wilson and others at the Gene Therapy Program have also expanded their research to include similar approaches to pathogenic viruses such as COVID-19.

Moving to the Discovery Labs enhances the program’s ability to conduct such advanced research. The new space includes two full floors for the Penn Vector Core, a major technological resource for investigators and therapy designers that advances the understanding of gene function, allowing for the development of new vector medicines. The location also provides ample space for every stage of drug R&D, from discovery research all the way through applications for clinical trials. All told, the multi-year lease includes over 150,000 square feet of lab space and two buildings on the Discovery Lab’s campus.

With innovative R&D organizations such as Penn’s Gene Therapy Program flocking to the Discovery Labs, King of Prussia will find itself in an enviable position post-pandemic. Penn joins Thomas Jefferson University Health, CHOP, the Centers for Breakthrough Medicine, GSK, and numerous other major healthcare companies and institutions at the Discovery Labs, positioning the company as the host for some of the most innovative and groundbreaking medical research in the United States.

Led by founder and chairman Brian O’Neill, the Discovery Labs have sought to leverage its more than one million square feet of lab space in conjunction with the amenities of their immediate location and proximity to Philadelphia’s “Cellicon Valley,” to attract some of the largest and most impactful healthcare companies and organizations to King of Prussia. So far, it appears to be working.

“Dr. Wilson and his incredible team at Penn have helped establish Philadelphia as a leader in gene therapies, and we are deeply honored to have the opportunity to work with him and his incredible team of scientists through the expansion of their world-class research and development labs,” O’Neill said. “To welcome Penn’s Gene Therapy Program as the anchor tenant for our planned life sciences cluster here in King of Prussia is strong validation for the incredible life science ecosystem that is emerging in Greater Philadelphia.”

It seems as if, for the foreseeable future, King of Prussia will stand as one of the brighter extensions of the Delaware Valley’s expanding “Cellicon Valley,” where medical innovation, scientific research, and treatment development are in the midst of an ongoing renaissance. The advent and growth of the Discovery Labs underscore the increased demand for top-flight R&D real estate, and offers promising returns for both the area and the greater medical community through its latest partnership with the University of Pennsylvania.

Evan Rodenhausen is a freelance writer who lives in the Philadelphia area. He wrote this for the Delaware Valley Journal.