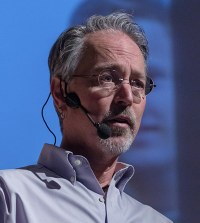 Penn State students taking Professor Sam Richards’ sociology class, White males in particular, should be prepared for a serving of Critical Race Theory with a side of humiliation.

The conversation begins with a discussion of a diversity training program the Coca-Cola Company uses that tells employees to “Be less White.”

Richards explained the training called for the Coke workers to “be less oppressive, to be less arrogant, to be less certain, to be less defensive, less ignorant, more humble…” Then, the video shows, Richards put two male students on the spot, grilling them about their attitudes to the Coke training and whether they believe they are privileged as White males.

“And God damned be more humble, for crying out loud,” Richards told the young men.

One of the students, James, who said he was from the Pittsburgh area, gave answers in line with CRT training. He said being “less White” was “more or less recognizing the advantages you have in life and not thinking yourself superior because of that.”

Then he asked Brian, who is from Bucks County, which people would find the Coke diversity training offensive and Brian told him conservatives.

“I don’t want to get canceled so I’m trying to be careful what I say,” Brian said.

Richards replied, “Dude, whatever you do, don’t get canceled, man.”

“There’s a stereotype. White people are mean to other races,” said Brian.

Brian told him it was “a little bit too far…Not everyone is like that. I don’t think I’m like that…”

A few minutes later, Richards asked the students, “Who have you oppressed today?”

“You’re breathing. Have you left your house today?” Richards asked.

“Okay, so you may have oppressed somebody.”

Richards added, “Have you demonstrated your ignorance?  That’s endemic to being a White man out in the world today.”

Attending Penn State isn’t cheap, even for in-state students like these: $33,000 tuition and other costs.

Or, if they’re from out of state, they pay more than $50,000 to learn that they are “ignorant, arrogant and dumb” if they, by happenstance, are born Caucasian.

Richards did not respond to a request for comment. However, Penn State did release a statement defending the aggressive professor.

“Public universities are by their nature a place for the free and open exchange of ideas and information, as well as a forum for debate and discussion that helps to not only create a robust learning environment, but to also promote thoughtful discourse.

“It is important to note, often on social media short snippets are taken out of a longer lecture/class discussion, and at times taken out of context. Our hope is that our students during their time at Penn State will be exposed to many new ideas that will help them to form, evaluate and even question what they know.”

Critics scoff at the university’s “thoughtful discourse” defense, arguing that a White, male professor who treated students of color — particularly women students — like that would be swiftly and severely punished.

“The key to bigotry is taking a generalization and applying it to a random unique individual. Sue this professor,” tweeted nationally-known commentator Andrew Sullivan.