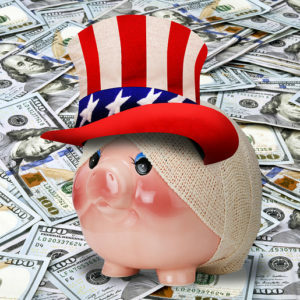 If you follow economic news, you know rising prices for consumer goods are a serious concern. The Bureau of Economic Analysis, for example, reports inflation has hit a 30-year high, and top economists warn it’s only headed higher.

Of course, in Pennsylvania, we don’t need expert forecasts or headlines to understand the reality of rising prices: we see the evidence around us every day. All we have to do is go grocery shopping or fill up the gas tank to see the reality. It’s one of the top concerns I hear about from anxious voters as I’ve traveled the state these last few months. We all recognize we’re spending more to get less — and thanks to the Biden administration’s economic mismanagement, that situation will get worse before it gets better.

The Bureau of Labor Statistics reported in August that the consumer price index increased more than 5.3 percent over the last year. That means the inflation surge is costing each U.S. household an extra $175 per month, according to an analysis by Mark Zandi, chief economist for Moody’s Analytics. For most Americans, that’s a tough burden – which will only grow heavier as prices continue to surge in the months ahead, as expected.

Economists refer to inflation as a “hidden tax” that hits everybody, but it doesn’t affect everybody equally. Working families, seniors on fixed incomes, and anyone who lives on a budget is hit harder. Living paycheck to paycheck? Depend on Social Security for your monthly expenses? Have money in a savings or retirement account? Be prepared to see your long-term purchasing power eaten away by rising prices.

Americans are right to blame Biden for the steep and rapid rise in prices, and they’re concerned by his administration’s reckless push for even more government spending. Americans recognize that printing money and pushing the accelerator on spending will only make things worse and fast.

Biden’s biggest gamble, his gargantuan $4 trillion infrastructure bill (only a tiny fraction of which is dedicated to roads, bridges and real infrastructure projects), will only continue this negative trend. The Republicans and Democrats in Washington who have refused to support the president’s big-spending proposal are doing the right thing trying to stop that train wreck.

We’ve heard a lot about Biden’s supposed moderation, but that moderation is nowhere to be seen lately as the White House pushes every big-ticket spending item from the left’s wish list. So it’s understandable that Pennsylvanians may suspect the entire campaign narrative about Biden’s sympathies for average working Americans was a massive con job.

The question is, what can we do to get surging inflation under control? First, end the spending spree in Washington. Printing money and endless deficit spending are proven losers, but in recent years they seem to be the only items in Washington’s playbook. As the national debt grows ever larger – and let’s be honest, both parties in Washington have contributed to that problem for too long — it’s past time to get serious about restraining runaway spending. That starts with putting a hard stop to Biden’s massive spending plans.

Next, we need to get back to a bipartisan focus on real jobs and growth. The 1980s and 1990s were politically polarized times, but somehow Republicans and Democrats under the Reagan and Clinton administrations managed to work together to nurture a surging economy that created jobs and widely shared economic opportunity. That was achievable once, and we can do it again.

Finally, a word of caution: as the economic problems compound, we should expect that the pro-Biden media and tech industries will go all in to paint a rosy picture, dismiss your legitimate concerns about skyrocketing prices, and even censor discussion of any inconvenient topic that reflects poorly on the president. (I know from experience: When I recently shared accurate inflation data with my followers on Facebook and Instagram, the social media platform flagged my post as “missing context,” a subtle way the tech giants’ censors try to make you doubt truthful information).

Don’t be taken in; trust your own instincts. People can see for themselves the impact that constant cost increases have on their standard of living. Just remember that Biden and his media supporters can’t lie their way out of an inflation spiral – we see the evidence at the check-out counter and the gas pump every day. If we’re going to get inflation under control and restore the economy to health, it’s time to end the business-as-usual spending in Washington and get back to a focus on jobs and growth.

Sean Parnell is a candidate for U.S. Senate in Pennsylvania. He is a New York Times bestselling author and a highly decorated combat veteran who was awarded was awarded two Bronze Stars, one for Valor and the Purple Heart.