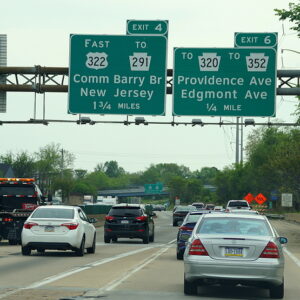 The Pittsburg Post-Gazette crunched the numbers released by the White House to find Pennsylvania stands to get $11.3 billion in additional money for roads, $1.6 billion for bridges, and $2.8 billion for public transit.

“The numbers being talked about are hugely significant,” said Scott Frances, Montgomery County Planning Commission executive director. “What’s happening now is a once-in-a-generation opportunity, something that we haven’t seen in my planning lifetime, which really covers the last 20 years. Certainly, this is a watershed moment and we’re ready to take advantage of it.”

The county has a comprehensive plan, Montco 2040, which lists its goals.

Chief among them is transportation infrastructure, including improvements along the Pennsylvania Turnpike corridor, including new interchanges for Willow Grove, Blue Bell, and at Welsh Road. A new interchange for Fayette Street in Norristown is already under construction.

But that excavation unearthed aging 120-year-old water mains, he said, that crumbled when the dirt was removed around them. Similar ancient pipes run under the older towns and boroughs and will require a large investment to replace.

“We need our water infrastructure,” France said. “We can see what happened in other parts of the country when it fails.”

He said he is also glad funds are targeted for public transit, which the Southeast Pennsylvania Transit Authority (SEPTA) sorely needs. And even the federal dollars earmarked for broadband are necessary for the more rural sections of Montco and to bolster internet services for poorer families, he said.

Money in the federal bill also covers new electric vehicle charging stations, part of the Biden administration’s push to get EV sales up to 50 percent of all car purchases by 2030.

Montgomery County planners are working with the Delaware Valley Regional Planning Commission to target the best places to spend the federal largess, which will add an estimated $256 billion to the federal deficit.

“They’re a great partner in this,” France said.

Carol Stauffer, assistant director of the Chester County Planning Commission said, “Chester County’s infrastructure systems are an integral part of our community and our economy.  Some of our priorities, as noted in our Landscapes3 Comprehensive Plan, are to reliably meet travel demands, reduce congestion, provide accessible sidewalks, trails, and public transit connections, and support safe, resilient, and sustainable energy systems, specifically, priority projects to reduce congestion include the US 30 By-Pass and the US 202 Corridor.”

The bipartisan infrastructure bill includes some controversial elements, such as a pilot program for per-mile road fees on drivers, and mandating alcohol monitors for all new cars.

“My bipartisan Problem Solvers Caucus released the ‘Building Bridges’ framework in early June to help jumpstart negotiations on the Senate infrastructure bill,” Fitzpatrick said. “We have worked closely with our Senate partners on a physical infrastructure package that covers everything from roads, tunnels, and rails to water, broadband, and EVs. It’s the largest infrastructure package in a century — without raising taxes. While many final details are still up in the air as the bill undergoes further amendments through the legislative process, I am confident that we will achieve a final legislative product that will deliver real tangible benefits to southeastern Pennsylvania. I look forward to a standalone bipartisan vote in the House as soon as possible upon Senate passage.”

And U.S. Rep. Mary Gay Scanlon (D-Delaware Co.) said, “The ‘Bipartisan Infrastructure Deal’ developed in the U.S. Senate would be one of the most significant investments in American infrastructure in modern history. While the funding levels are lower than originally proposed in President Biden’s American Jobs Plan, Pennsylvania-05 and the rest of southeastern Pennsylvania stand to benefit greatly from the infrastructure bill.

“By addressing the enormous — and longstanding — infrastructure deficits in Southeastern Pennsylvania, we can both boost our regional economy and advance equity in our communities. Improving our roads, airports, and ports is absolutely essential to the region’s continued economic success. We cannot compete with the rest of the world if our basic infrastructure is crumbling. And investments in areas like water infrastructure and broadband are a critical equity issue for communities that have suffered from generations of disinvestment.”

While both Sens. Pat Toomey (R-Pa.) and Bob Casey (D-Pa.) support the spending package, neither responded to requests for comment. Toomey’s website has a link to the full 2,702-page bill.