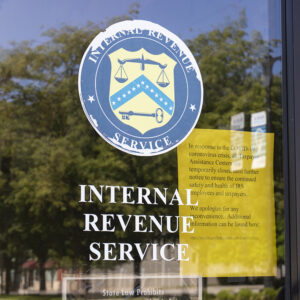 Pennsylvania Republicans are pushing back against a Biden administration plan for the IRS to monitor every bank account with more than $600.

“This unprecedented grab of personal banking information from both business and personal accounts is a threat to Americans’ financial security and to the community banking industry so many rely on,” Garrity said. “Not only would this create massive privacy concerns, it would bring enormous administrative burdens to the banks and credit unions who will be forced to comply with such unnecessary mandates.”

“One of the misguided proposals embedded within President Biden’s American Families Plan would violate law-abiding taxpayers’ privacy and place onerous new reporting requirements on financial institutions,” Toomey wrote in a letter with several of his fellow Republicans. “Specifically, this proposal would require banks, credit unions, and other financial institutions to report financial account information to the IRS for nearly all of their customers – including gross inflow and outflow information, and possibly transaction information.”

The proposal came to light in written testimony to the Senate Finance Committee from IRS Commissioner Charles P. Rettig in June.

“This plan would force banks to develop a costly new system to provide private financial data on almost every taxpayer to the IRS, not just those suspected of cheating on their taxes,” said Rob Nichols, president and CEO of the American Bankers Association.  “It’s not clear the IRS could even process and protect all that information. Perhaps most troubling of all, it risks driving people away from the banking system and all the economic benefits that come from having a bank account. We urge Congress to reject this bad idea.”

And, says Rebeca Romero Rainey, president and CEO of the Independent Community Bankers of America, the American people don’t like this plan either.

“An ICBA poll conducted by Morning Consult found 67 percent of voters oppose requiring financial institutions to report customer account information to the IRS, while consumers are speaking with more than 400,000 messages to their members Congress in opposition,” Rainey said in a statement. “The IRS reporting proposal is an invasion of consumers’ privacy, a violation of Americans’ due process, a data security risk amid the agency’s ongoing tax return leak investigation, and a threat to bipartisan efforts to reduce the unbanked population by driving more Americans out of the banking system and toward predatory lenders.”

Toomey and his Republican colleagues also noted the IRS’s “troubling record of failing to protect certain confidential taxpayer information and abusing its authority, specifically the targeting of conservative political groups, this proposal would undermine trust in the financial system and, in turn, reduce financial inclusion.”

In 2013, the Obama administration’s IRS was caught targeting conservative organizations, denying or drastically slowing their attempts to create advocacy organizations beginning in 2010. In 2017, the IRS issued an apology as part of a court-approved settlement.

The impact of this IRS rule would have “an outsized impact on credit unions serving rural communities,” according to Jim Nussle, president and CEO of the Credit Union National Association.

“This proposal is deeply concerning for America’s credit unions and their 120 million members. From the massive 2014 data breach at the Office of Personnel Management to this year’s IRS leak of federal tax returns, the federal government’s checkered history of warehousing personal data underscores the dangerous impracticality of this policy proposal.”