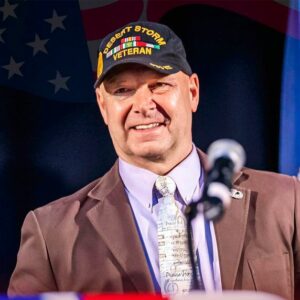 With primary elections completed in 13 states — five of them swing states —  political consultant John Couvillon of JMC Analytics and Polling found a 38 percent increase in Republican primary turnout over the 2018 midterms.

Votes for the Republican ticket outnumbered the Democrats in Texas, Georgia, North Carolina, Pennsylvania and Ohio — all key battleground states in 2020. And Democratic turnout was down in seven states, while GOP participation was up across the board.

And that’s likely bad news for President Biden and his party.

“When you have this massive increase in Republican numerical turnout relative to the Democrat side, that’s really the essential part of the story,” Couvillon said. “I am convinced primary enthusiasm can and does translate into midterm turnout.”

“Many would argue that there are growing concerns among many Americans over the right track/wrong track trajectories of this country,” Terrill said. “Do Americans have confidence in where this country is going? Right now, many Americans do not have that confidence. That’s why Republicans appear to have a lot of momentum.”

Biden’s approval rating is hovering around 40 percent approve/55 percent disapprove in the RealClearPolitics.com average of polls.

Some Democrats push back on the turnout issue by noting not every state has competitive races in both parties, and some election fights — like the high-profile Gov. Brian Kemp vs. former Sen. David Perdue primary in Georgia — garner much more attention and interest. But as political analyst Walter Olsen wrote in the Washington Post:

In North Carolina, 20 percent more votes were cast in the Republican Senate primary than in the Democratic contest.

Wesley Leckrone with Widener University said it is expected for the opposing party from the one in the Oval Office to have higher turnout rates in a primary election. However, he also attributes the momentum in the Republican Party to Democratic voters’ discontent with party leadership.

Both Terill and Leckrone agree that pocketbook issues like inflation and gas prices are hurting Democrats with independent voters.

But with the leaked draft of a Supreme Court opinion appearing to show a majority vote to overturn Roe v. Wade,  Leckrone said abortion could also be an influential issue in places like Pennsylvania.

Terrill said some voters are also concerned about the leak itself, not just the content of the opinion. “Look at how this issue came to light,” Terrill said. “I think this leak out of the Supreme Court is correlated to a growing distrust many Americans have within our institutions.”

He said Trump’s rise to the presidency is attributed to his ability to tap into Americans’ distrust in government. And despite the disastrous performance of Trump-backed candidates in Georgia, his influence is still important, Leckrone said.

He pointed to J.D. Vance’s win in Ohio, and the surprising out-of-nowhere performance of “Trump carbon copy” Kathy Barnette in Pennsylvania.

“If you were to add up (Dr. Mehmet) Oz and Barnette, you would get more than 50 percent of the vote,” Leckrone said. “What it really says is the Republican Party in Pennsylvania is Trump-esque. The Republican Party is driven by the ideas of Trumpism, even if some people don’t agree with him.”

While Trump touts a near-perfect record of endorsed candidates either winning or making the runoffs, he hasn’t had nearly that level of success in competitive races. For example, Trump didn’t endorse GOP gubernatorial candidate Doug Mastriano in Pennsylvania until just four days before the election and after the candidate had a solid, double-digit lead in the polls. On the other hand, his endorsement of Dr. Oz wasn’t enough to lift him above 32 percent of the vote, leaving him in a neck-and-neck contest with former hedge fund manager Dave McCormick.

“His record is very mixed as to the potency of his endorsement,” Couvillon said. “The risk he is creating by being too free and easy with his endorsement is that it creates the chance of having more losses. He can’t afford to have more losses on his record.”