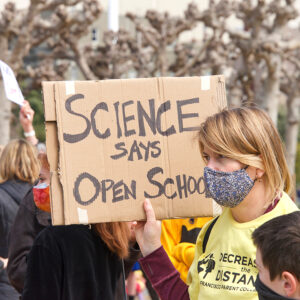 “Many schools in Pennsylvania have worked hard over the past year to keep their doors open to students while providing a safe learning environment,” Saylor said in a statement. “They should be commended. Unfortunately, we continue to see too many special interests and others fighting to keep other schools closed to in-person instruction. We appropriate over $16.6 billion from the state’s General Fund to support PreK-12 and higher education. If school districts, technical schools, community colleges or universities do not open their doors to full-time, in-person instruction, working with my colleagues, I will push to ensure the School Code prohibits them from accessing these dollars.”

He buttressed his argument by citing a national study released in December that found K-5 students learned only 67 percent of the math and 87 percent of the reading that grade-level peers would typically have learned by the fall. The study also found students could lose on average five to nine months of learning by the end of June 2021. Additionally, Saylor noted the Centers for Disease Control (CDC) now recommends students only need to be three feet apart instead of six.

Joel Fishbein, president of the Cheltenham School Board, strongly disagreed with Saylor. “That’s a bad policy to cancel students’ appropriations,” he said.

Fishbein says the money is meant to be used for a “free and appropriate education,” but what might happen with the pandemic is still unknown, and schools need the flexibility to deal with their situations.

“We don’t know what conditions will be in September,” he said, pointing out that there are now variants of the virus. He noted some districts do not have the money to install special air filters to ventilate classrooms or may have a large group of teachers who would be vulnerable if they contract COVID.

He said schools should not be “held hostage” to the state’s directives. Cheltenham High School is currently using remote learning because of the problem of a large contingent of teachers who are at risk. “Everyone has to be flexible,” said Fishbein. “For Harrisburg to make a dictate like that would be a bad idea.”

Officials from Radnor Township and Lower Merion school districts, where classes have resumed in the buildings, declined to comment.

Some parents reached through Facebook had differing opinions about Saylor’s proposal.

“Is this plan contingent on vaccines being available to everyone? If not, I would not be okay with this,” said Kristina Denzel Bickford. A Cheltenham resident, her child is in sixth grade in a private school and learning remotely, although the middle school is open in the Cheltenham School District for students who want to attend. Remote learning is also an option at that school. Bickford said she did not want to put her child or teachers at risk.

Helene Metzger, another Cheltenham resident said, “The CDC and the school district should decide.”

Philadelphia resident Heather Kaplan Matt, who has two children, said, “I strongly agree with cutting off funding. I think all children should go back full time. Teachers have had the option of being vaccinated by this point. I think child welfare is not cared about in schools anymore. It’s all about the staffs’ safety.”

Nikki Cee, another Cheltenham parent with one school-age child, said, “I think it’s fair what the state rep is proposing. If they are receiving state funding, then they should do what is proposed.”

“The proposal seems to assume that if we ignore COVID it will go away,” said Weilerstein. “It will likely be with us for many months due to variants and due to the time to learn how to conduct universal vaccination. The one thing we can control is our own exposure risks. This proposal would take that away.”

But Al Mardt said, “The funds are received, in part, to maintain normal operation of the buildings, are they not? If the affected districts are not operating normally, then why receive the funds? Let the school districts fend for themselves. I have two [children] in Abington. Been fighting for my kids for months, and we are all excited that they’re going four days a week after Easter.”