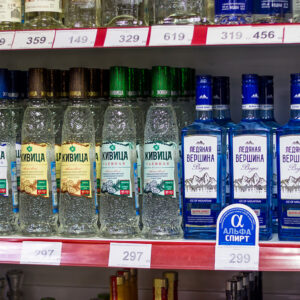 Russian vodka on a store shelf in Moscow in 2021.
News

Russian vodka sales are on the rocks in Pennsylvania thanks to political pressure from both sides of the aisle.

On Sunday, the Pennsylvania Liquor Control Board (PLCB) “instructed all Fine Wine & Good Spirits stores and licensee service centers to remove Russian-made products from shelves as a show of solidarity and support for the people of Ukraine. Russian-made Special Order products are also no longer available,” according to a press release.

“As of today, these products will no longer be sold or procured by the PLCB,” said Board Chairman Tim Holden.” Given the evolving political-economic climate, it’s just the right thing to do.”

Holden took the action just hours after Gov. Tom Wolf (D) released a letter urging the commission to follow the lead of other states and private liquor retailers around the country and take Russian alcohol off the shelves.

“Along with you, I have watched the unfolding events in Ukraine and the unprovoked attack by Russia on a peaceful and democratic nation with horror,” Wolf wrote.

“I urge you to remove Russian-sourced products from stores and cease selling them as quickly as possible as a small show of solidarity and support for the people of Ukraine, and an expression of our collective revulsion with the unprovoked actions of the Russian state.”

And state Senate President Pro Tempore Jake Corman (R-Centre) also sent a letter to the PLCB, saying he had “indicated that I would be making a formal request to halt the sale of all Russian-produced vodka and spirits in Pennsylvania’s Fine Wine & Good Spirits stores,” and urging the agency to act. He noted that “similar boycotts are also under consideration in several other U.S. states.”

One of those states is New Hampshire where, a day earlier, the Republican Gov. Chris Sununu issued a similar order.

“It’s what we can do to stand with the folks of Ukraine who’ve been thrown into a war they didn’t ask for,” Sununu said, adding that in some small way, New Hampshire might help “push those Russians back to Moscow where they belong.”

It doesn’t hurt that New Hampshire has consistently been ranked one of the hardest-drinking states in the U.S., consuming close to five gallons of alcohol per person every year.

Pennsylvania, on the other hand, is in the middle of the pack, with a per capita alcohol consumption of just 2.3 gallons a year.

Both states are among the 17 identified by the National Beverage Alcohol Control Association as “control” states, where the sale of beer, wine, and spirits is under the direct control of state governments. As a result, the state can take a single action, like banning Russian booze from store shelves, and it has an immediate action.

“The PLCB regulates the distribution of beverage alcohol in Pennsylvania, operates 600 wine and spirits stores statewide, and licenses 20,000 alcohol producers, retailers, and handlers,” according to a statement from the agency.