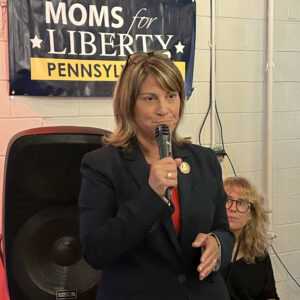 Republican lieutenant governor candidate state Rep. Carrie DelRosso knows her running mate, state Sen. Doug Mastriano, is getting outspent by a huge margin. But she told a Montgomery County Moms for Liberty meeting in Lansdale Monday the GOP ticket is counting on a grassroots army of “mama bears” to take them to victory.

“Shapiro has a $16 million TV buy. What else can he say about a 30-year colonel in the Army, who knows strategy, who’s brilliant, he’s got his doctorate in history?”

While the event was billed as a discussion of Mastriano’s education plan, the conversation was open-ended. Many attendees expressed their worries the Nov. 8 election will be stolen through mail-in ballots and drop boxes. DelRosso encouraged them to sign up to be poll watchers and to turn off the TV and knock on doors and make phone calls.

Mastriano, who recently voted to increase state funding for education by $800,000, has noted the average Pennsylvania school district spends $20,000 per student. 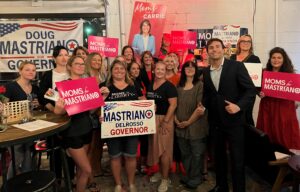 As governor, his proposals include strengthening and enforcing statewide curriculum transparency requirements and working with the legislature to establish a universal “parental rights” statute, according to Josh Herman, deputy campaign manager, who also came to the Moms for Liberty meeting.

Mastriano believes schools should teach children how to think, not what to think. On day one, Mastriano will ban Critical Race and Gender Theory studies. He also opposes biological males using girls’ locker rooms and restrooms and would ban biological males from competing in women’s sports, Herman said.

Mastriano also supports school choice. He believes every child is entitled to a top-notch education and that, when schools compete, it promotes excellence. He will make sure public schools continue to receive level funding but will also back competition that will improve them. And Mastriano plans to work with the legislature to bring school choice to Pennsylvania families to prevent children from being trapped in failing schools, Herman said.

“It’s time that we empower the parents and not these institutions,”  Mastriano said recently.

DelRosso, who grew up in Scranton, was upbeat about the chances for the Republican ticket, despite being outspent massively by their opponents.

After going to college at the University of Pittsburgh, she stayed in that area.  The divorced mother of three children, who served on the Oakmont Borough Council, was running her own public relations business when she decided to run for a seat in the state House, mostly because she saw what was going on behind the scenes in her local school district.

She flipped her Allegheny County district and beat the state Democrat minority leader by working hard and going door-to-door. She said she believes the Mastriano/DelRosso campaign can use those same grassroots tactics to win in November.

She was going to lose her seat this cycle due to redistricting, so she decided to run for lieutenant governor “to serve the people.”

“The Democratic old boys’ regime tried to sideline me,” she said. “I was the last person in the (lieutenant governor’s) race and I ended up winning by 120,000 votes.”

Her oldest son, Vincent, 14, asked her what she was going to do when he learned about redistricting. She said she would find a job.

“He told me, ‘Mom, you don’t retreat.’” When her son was in 8th grade he did a presentation for his public speaking class on the person he admired most. He chose his mom. He gave her the speech that he had written for Mother’s Day and she framed it. Her other children, Domenic, 12, and Mia, 11, are also onboard with her campaign.

And, she said, all three kids know not to believe all the negative campaign commercials now running against their mom and Mastriano.

“My kids get it now. Even the negative ads now, (her son says), ‘Watch this one, Mom.’ He knows it’s propaganda.”

Herman said he first heard about Moms for Liberty because of a Libs of TikTok tweet about a North Penn School District teacher making White kids apologize to Black kids because of their skin color during a “privilege walk.” He talked to Mastriano about it and got involved, even though it was not his district.

“A lot of other politicians would have said, ‘It’s not our district, it’s another senator or representative’s issue,’” said Herman. “That’s not the kind of guy Doug Mastriano is.”

“There’s other stuff going on in every school district across Pennsylvania,” said Herman. “There’s a very clear contrast in this race.  When you look at what (Gov.) Tom Wolf’s Department of Education has done in this state, the results are pretty clear. The last test results statewide showed that only 22 percent of 8th graders were proficient in either math or reading, 22 percent.”

“It’s time to rethink education here in Pennsylvania,” said Herman. “Josh Shapiro stood with Tom Wolf in supporting the mask mandates, he supported the school closures, all the horrible things the pandemic brought in 2020, the school shutdowns, the escalation of these woke ideologies, whether it was CRT, gender theory, all kinds of this nonsense that has crept into our schools across Pennsylvania. One of the most encouraging things we saw was a grassroots movement that rose up.

“It was led by angry mamma bears,” he said. That led to elections in 2021 across America where parents elected new school boards, including the Back to School PA movement. In Virginia, it led to the election of (Gov.) Glenn Youngkin. “That election was mostly owed to parents saying, ‘Enough is enough.’  (Defeated Democrat) Terry McAuliffe is just basically a Virginia version of Josh Shapiro.”

Wolf vetoed a bipartisan bill that said curriculum had to be posted online.

“Doug Mastriano will sign that into law,” said Herman. “The number one priority is going to be empowering the voices of parents.”