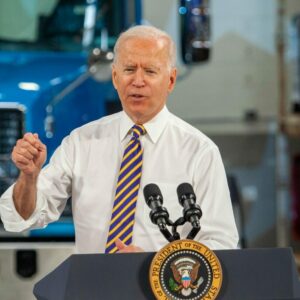 As the economic numbers turn negative for the White House, the Biden administration has gone into a full court press to re-define the “R’ word.

The Gross Domestic Product number for the second quarter of 2022 will be released on Thursday. Given the economy shrank in the first quarter by 1.6 percent, any drop would mean two consecutive quarters of negative growth — the classic short-hand definition of a recession.

As this video shows, during the Trump administration, Democratic economists and activists had no doubt about the “two consecutive quarters” standard:

But beginning last weekend, Biden administration officials started aggressively pushing to re-define what “is” is when it comes to the question, “Is the economy in a recession?” On Sunday, Treasury Secretary, Chuck Todd, Yellen seemed to surprise liberal media personality Chuck Todd at NBC:

You’re splitting hairs. I mean, if the technical definition is two quarters of contraction, you’re saying that’s not a recession?

That’s not the technical definition.

That’s not the technical definition. There’s an organization called the National Bureau of Economic Research that looks at a broad range of data in deciding whether or not there is a recession. And most of the data that they look at right now continues to be strong. I would be amazed if the NBER would declare this period to be a recession, even if it happens to have two quarters of negative growth. We’ve got a very strong labor market. When you’re creating almost 400,000 jobs a month, that is not a recession.

Brian Deese, Biden’s director of the National Economic Council, joined the effort on Monday. “The technical definition is not two negative quarters,” Deese said. “Technically, the definition is the NBER’s definition.”

Later in the day, President Biden took the argument even further, predicting there would be no recession at all. “We’re not going to be in a recession, in my view,” Biden said. “The employment rate is still one of the lowest we’ve had in history. It’s in the 3.6 (percent) area. We still find ourselves, the people, investing.”

“I wish the White House had a vaccine for denial, because they have seriously been infected here,” said House Ways and Means Committee ranking member Rep. Kevin Brady (R-Texas). They have on inflation, on the worker shortage, and on the recession. We have a shrinking economy, shrinking paychecks, shrinking workforce, and most Americans feel like they’re already in a recession. My guess is we already are.”

“Our families know that we are in a recession. It’s time for Biden, Houlahan and Congress to stop the word games. Inflation is very real—eating away paychecks and our savings; gas costs too much; interest rates are rising and products are missing from store shelves or shrinking in size.”

“The Biden Administration can call it whatever it wants; two consecutive quarters of negative GDP growth and historic inflation is making families across PA-05 worse off than before. We hear about their pain every day,” Galluch said. “Our top priority in Congress will be making life affordable and families financially secure once again. We won’t run from the responsibility before us and are eager to bring the change that a vast majority of voters want.”

Unfortunately for the Biden administration, the GDP number is just one economic data point to be released this week. On Tuesday, the new consumer confidence numbers will hit (they’re not likely to be good), followed by the Fed almost certainly announcing a 75 basis point increase in interest rates on Wednesday.

Thursday is the GDP number and Friday is the latest survey on consumer price inflation.

All in all, not a great week for the party in power.

So, is the nation on the verge of recession? Ask the members of the NFIB — the nation’s leading small-business organization — and they are already living it.

“The NFIB Small Business Optimism Index dropped 3.6 points in June to 89.5, marking the sixth consecutive month below the 48-year average of 98. Small business owners expecting better business conditions over the next six months decreased seven points to a net negative 61 percent, the lowest level recorded in the 48-year survey,” the group reported.

On the other hand, economist Ed Pinto with the American Enterprise Institute’s Housing Center says housing prices are still rising, which would indicate a recession may not be imminent. Like Biden, he points to the low unemployment numbers.

“In this case, we’re not seeing a recession in housing. That would require an increase in the unemployment number, which would drive down demand and cool the market,” Pinto said. ‘Instead, home prices are still rising, though more slowly. So if you ask if we’re in a recession, all I can tell you is that we’re not in a housing recession.”

Economist Peter Morici at the University of Maryland is also on the fence. He says Yellen is technically correct about the declaration of a recession by the NBER, but he also says voters don’t care about “technical” downturns. They care about real life.

“A recession is just the period between an economic peak and a trough,” Morici said. “When recessions are declared, sometimes long after they’re over, they are measured by months, not quarters. But GDP is too difficult to calculate one month at a time.”

With inflation at 40-year highs and unemployment at near-historic lows,  where does Morici put the economy?

“On the call regarding a recession, it’s a very close call. How do you say an economy is in recession when the labor supply is so tight businesses can’t find workers?” Morici asked.

“At the same time, the numbers on income from the household survey show a much more rapid decline than the payroll survey. If household income falls, it could definitely push us to recession.”

Morici would not say if Republicans or Biden are right, but he did say the economy is in a very strange place.

“Look, every recession is different, but this one is at least three standard deviations from the norm.”

In the end, does this debate really matter? Ciarrocchi says yes.

“How can they solve our problems if they don’t recognize the problem?”