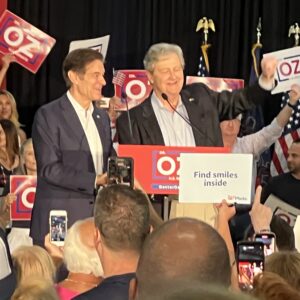 There was no need to ask, “Is there a doctor in the house?” during a campaign event for Dr. Mehmet Oz in Bucks County Saturday night. The GOP U.S. Senate candidate revived a woman who fainted in the crowd, an unplanned-but-timely reminder of his medical bona fides and the health issues that dog Democrat Lt. Gov. John Fetterman.

Local radio host Dom Giordano was speaking to some 1,500 people at the Newtown Athletic Center when a woman in the audience passed out. Oz leaped over a railing to administer first aid. He was joined by state Rep. Frank Farry, a state Senate candidate, who also serves as chief of the Langhorne-Middletown Volunteer Fire Company, and GOP state Senate candidate Matt McCollough, who is a nurse.

Later, Oz reported “Rita, God bless her, is doing well.” An Oz campaign staff member said it was at least the third time he had helped someone who had a medical problem on the campaign trail, including once on an airplane.

The rally was a metaphor of sorts for the Oz campaign, given up as dead by some pundits after a series of polls showed him trailing Democrat John Fetterman by double digits, in addition to making some high-profile missteps, like Oz’s Wegman’s visit to talk about the price of “crudites.”

But the latest polls now show Oz in a single-digit race with Fetterman, and the first-time candidate was greeted by an enthusiastic crowd. He hit the Biden administration and its ally Fetterman on everything from inflation to education to the Green New Deal.

Oz said his father grew up in Turkey in a home with a dirt floor and “yet he was very proud.” He came to America legally and “passionately believed in the American Dream,” a passion he passed on to his son. Oz talked about attending medical school at the University of Pennsylvania and the lessons he learned there.

“Doctors fix things. That’s what we do,” said Oz. He said he talks to his patients and gets them involved in their health. He started a TV show to share his experiences so “all of America would get better.”

Then the COVID-19 pandemic hit.

“For doctors, COVID was a catastrophe,” Oz said. “Not just because of the horrible loss of life and illness, but we weren’t allowed to play the role we could play in treating it.”

“I learned when you mix politics and medicine, you know what you get? Politics,” he said.

In other parts of the world, children remained in school. Although some research backed up that approach, “you couldn’t say it. If you did, you got crushed,” Oz said.

“In this commonwealth, we had the worst of the worst. We had the biggest restrictions, shutdowns, the biggest mandates and we didn’t get any better for it,” Oz added. “There were three states that did worse than anybody else, Pennsylvania, New Jersey, and New York. And those were the states with the toughest restrictions. States that didn’t do that, like Florida, didn’t have the same problem.”

“My opponent in this race, John Fetterman, was lieutenant governor throughout that,” he noted. “There was a 60 percent increase in crime here in Philadelphia.”

Before Oz spoke, several Republicans took to the stage to talk up his candidacy. Sen. John Kennedy (R-La.) used humor and his southern drawl to wholeheartedly endorse Oz, while also taking jabs at his opponent.

“Dr. Oz is not a trust fund baby. Dr. Oz did not have his mommy and daddy support him until he was 50 years old,” said Kennedy, referring to Fetterman. “Dr. Oz is not hiding here in his basement.

(Fetterman is notorious for wearing a hoodie and shorts, sometimes at official gatherings.)

“If Mr. Fetterman wins this race, Pennsylvanians will have nothing to worry about unless you are a taxpayer, a parent, a business person, or a cop, or you believe in the American Dream. Because he will fit right in, I can tell you, with the woke, neo-socialist, left of Lenin, wack-jobs running this country,” Kennedy said.

Many people in government “don’t understand the value of a dollar and the meaning of hard work,” Garrity said. “And we know the Democrat nominee for the U.S. Senate, John Fetterman, is anything but a hard worker, right? The hardest John Fetterman ever worked as a lieutenant governor was when he walked outside his office and flew the marijuana flag outside the capitol,” she said.

“Dr. Oz loves our country with a fervor that only a son of immigrants has,” Garrity added.

Oz said the Biden administration and Democrat-controlled Congress are wrecking the U.S. economy with high inflation, crippling the energy industry, and allowing rampant crime, among other things.

“There is this thing called the Green New Deal. You all heard of it?” Oz asked. “Well, the Green New Deal isn’t legitimate science. It cannot work. In order for us to have this, you actually have to sell us to China. Everything we need, all the batteries, all the solar panels, they’re coming from China,” Oz said.

The Republican also tapped into the education issue, which helped energize Glenn Youngkin’s successful bid for Virginia governor among suburban voters, like those in the Delaware Valley.

“You can’t claim that science says it’s correct to teach a 5-year-old about gender issues. It is complicated stuff…They’re not basing that in science. They make that up,” Oz said. “When the Department of Education says they’re going to teach our kids from age 3 to 12th grade about gender fluidity, I say, let the parents get involved.”

The Bucks County rally was Oz’s third event in five days in the state’s southeast region, and some political observers have raised questions about his focus on such a blue corner of the state. But GOP strategists say Oz’s weakness in the GOP primary — he is a TV doctor who appeals to moderates, not a conservative politician — could be a strength in the Philly suburbs in November. If Fetterman’s far-left politics are viewed as too extreme by suburban women, Oz could be a more acceptable alternative than a conservative activist.

Meanwhile, Oz said the focus should be on the Democrats’ performance, not political rhetoric.

“We have to hold people accountable for what they’ve done,” said Oz. “That’s what our job is…You have an obligation, in the vanguard, tip of the spear. You must call people and share what you’ve heard tonight. Be optimistic because I am optimistic.”

All these problems “we can address if we have strong leadership,” he said.

He played football in college and heard the last words of the National Anthem while running out to the field: “Home of the brave.”

“You can’t be free if you’re not brave. This time in our history calls for more bravery than most of us have had to muster in our lifetimes. Because the most important thing we need to do is say what we see.”