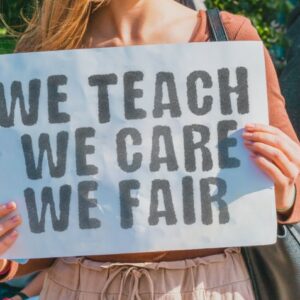 Pennsylvania leads the country in teacher strikes—and it’s not a close race. A Commonwealth Foundation study counted 131 strikes over a 19-year period (1999–2018), which resulted in 1,383 missed school days and affected some 300,000 students. The progressive magazine Mother Jones reported that from 1968 to 2012, nearly 90 percent of all teacher strikes happened here in Pennsylvania.

This whole ritual sidelines the families involved. Kids lose out on learning, and parents must upend work schedules to accommodate strike-related school closures. And many in the local community—perhaps up to 45 percent, according to the most recent polling—do not support teachers when they strike. That’s bad for teachers. And it’s terrible for the community.

So how does the PSEA goad teachers into self-destructive strikes?

The PSEA assigns just a few teachers to the contract talks with the school district, and they’re all sworn to secrecy. The preeminent figure in these negotiations is a PSEA employee called a “UniServ Representative,” not a local teacher. The typical UniServ Rep is paid at least $120,000 and ensures negotiations are good for the PSEA—and only coincidentally for local teachers. For example, in the midst of another PSEA strike authorization earlier this year, the PSEA used precious bargaining capital to push one of its statewide priorities: Inserting new language giving the union the right to force a “fee” from teachers who aren’t union members, if and when it ever becomes legal to do so.

Most teachers learn only what the PSEA wants them to know and little to nothing about what the school board offered or was willing to discuss along the way.

The PSEA then asks teachers to “authorize” a strike. Union officials explain to teachers that it won’t actually strike (yet) and that the vote is typical saber-rattling, giving them better leverage in negotiations. After all, they tell teachers, the union has been through this countless times.

What they don’t tell teachers is that the PSEA won’t be back to ask anyone for permission before calling a “legal” strike.

And by that time, it’s too late for union members legally bound by union rules not to walk the picket line. Although teachers rarely miss any pay as a result of a strike, they don’t get paid extra to strike and then catch up on classwork.

For teachers, that means being able to leave the union at any time, but especially as a strike looms. Rep. Greg Rothman introduced such a bill last year, and it received overwhelmingly positive feedback in legislative hearings.

And for parents, it means they should be able to send their children to schools where self-interested union executives cannot push teachers to strike. Expanding Pennsylvania’s tax credit scholarships or adopting the Lifeline Scholarship Program embraced by Governor-elect Josh Shapiro would go a long way toward solving our teacher strike problem.

David Osborne is the Senior Fellow of Labor Policy with the Commonwealth Foundation, Pennsylvania’s free-market think tank. He wrote this for Delaware Valley Journal.