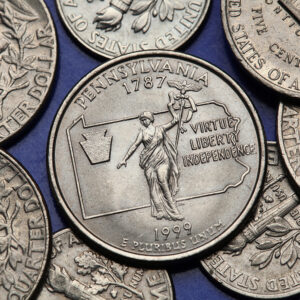 By Jonathan Williams and Dave Trabert

As state and local officials in states like Pennsylvania work through budget-related COVID challenges, they should pay heed to Benjamin Franklin’s counsel: “Out of adversity comes opportunity.” In this case, the opportunity is finding more efficient uses for taxpayer dollars and then providing permanent state and local tax relief.

The amount that states and local entities tax is solely determined by the amount each chooses to spend providing services. The vast majority of both groups found ways to reduce costs and offset some revenue losses during the pandemic, and a great deal of the savings was in personnel.

The December jobs report shows a reduction of 350,000 state government jobs compared to the year prior, and local government units collectively had 863,000 fewer workers.

With more than 1.2 million government jobs gone, state and local legislators should ask agencies some frank questions, like:

If the average all-in cost is just $60,000 per job, there would be almost $73 billion on the table for possible tax relief. The number could be much higher, however. Some states bizarrely added government jobs while the private sector was being decimated; those governors may blame COVID for the need to add more staff, but that doesn’t wash since most states made significant reductions.

Five states–Alaska, Iowa, Montana, New Mexico, and Oregon–reported more state government employees in December compared to the year prior. The 50-state average state job reduction was 6.4 percent, but some states only made smallish cutbacks.

Pennsylvania had 443,000 fewer private-sector jobs in December compared to a year ago, down 8.2 percent. But the Keystone State only cut 9,000 state jobs (5.8 percent), and local government jobs were about 23,000 less than a year ago, for a 5 percent decline. The private-sector decline was much worse than the national average of 6 percent, but state and local government job dips were less than the national averages of 6.4 percent and 5.9 percent, respectively.

Utah and Idaho, both rapidly growing states, showed strong fiduciary responsibility toward taxpayers. They were the only states with more private-sector jobs compared to a year ago, but they still managed to reduce some state jobs; Utah cut state jobs by 3.3 percent and Idaho by 8.9 percent. This builds upon prudent decision-making from this duo of states, which ranked first and third respectively for their economic outlook in the latest edition of the annual Rich States, Poor States: ALEC-Laffer State Economic Competitiveness Index.

Hawaii was the only state with more local government jobs (100) in December than the year prior; the 50-state average was a decline of 5.9 percent.

State and local legislators will be lobbied heavily to replace every government job, and some may need to be replaced. However, policymakers can push back against the arguments for more government jobs with logic and facts.

‘We’re already cut to the bone’ and ‘we are very efficient’ are two more justifications that will be thrown at state and local legislators. Here, legislators can respond with questions like, ‘how do you measure that’ and ‘have you analyzed whether these functions could be provided more efficiently by outsourcing or by collaborating with another government unit.’

Comparing the number of government workers per-capita across states is a good start at measuring efficiency. Using the July 2020 population estimates and the December 2020 jobs report, New York has 59 percent more state and local government employees than Florida (682 per 10,000 population vs. 429). Both states have similar populations and provide the same basic services but Florida does so much more efficiently – and their residents benefit by having a much lower tax burden.

State and local legislators should seize this opportunity to insist on prioritizing spending and using savings to provide permanent tax relief. Everyone deserves a lower tax burden, especially the 7.5 million Americans who lost jobs and are still expected to pay property tax. Moreover, real tax relief that enhances economic competitiveness for states and localities will create a pathway for those currently unemployed individuals to rejoin the workforce.

Jonathan Williams is chief economist and executive vice president of policy at the American Legislative Exchange Council. Follow him @taxeconomist. Dave Trabert is the chief executive officer at Kansas Policy Institute. They wrote this for Delaware Valley Journal.