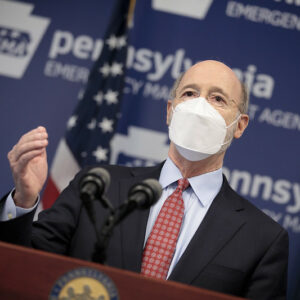 The information parents obtained through Right-to-Know (RTK) requests includes letters from Alison Beam, an attorney serving as Wolf’s acting health care director, and email records that together describe how state officials worked with the commissioners to reverse guidance from the Bucks County Health Department. The letters and emails were from August 2021.

Those parents from the Central Bucks School District, among those who prevailed in Wednesday’s decision against the Pennsylvania Department of Health, specifically named Beam as a defendant. They are also part of a separate, but related suit against their district that is currently before the Court of Common Pleas in Bucks County.

The RTK records flesh out some of the key decision-makers who enabled the Wolf administration to coerce its more restrictive COVID-19 policy preferences on Bucks County. The state-local conflict kicked off with an August 23 letter from Beam to the Bucks County commissioners. In it, Beam opposed the 2021–2022 School Reopening Guidance and Frequently Asked Questions that Dr. David Damsker, the county health director, had circulated just days earlier on August 15.

Damsker wrote in his guidance, “Thankfully, all available evidence in Bucks County and—elsewhere—indicates that while serious illness in children with COVID-19 is possible, it is very rare.” He added, “There is also a clear consensus that students learn best while in school and there is no substitute for the advantages that in-person learning provides.”

But the Wolf administration was having none of it. Beam’s letter labeled “numerous aspects” of Damsker’s guidance as “inconsistent” with federal and state recommendations. In preparation, Faith Haeussler, director of intergovernmental affairs for the state health department, sent an August 23 email addressed to Diane M. Ellis-Marseglia, Bucks commissioners chair, alerting Ellis-Marseglia to Beam’s pending letter: “I would like to speak with you at your earliest convenience to discuss a letter that the Department of Health will be issuing in the future.”

From that point forward, Haeussler served as a conduit for communication between county and state government officials. The official response to Beam’s letter came from Margaret McKevitt, chief operating officer for Bucks County, who sent an email addressed to Beam and Haeussler where she attached the county’s amended, more restrictive, guidance. McKevitt’s email copied the commissioners and Damsker. The commissioners’ August 23 press release detailed those changes, but provided no evidence or statement that Damsker’s guidance had changed.

“Given Damsker’s past of being measured and consistent with his previous school guidance, it would have been extremely out of character for him to change his advice two days after issuing a guidance update,” Megan Brock, a parent active with a grassroots group known as ReOpen Bucks, observed. If Damsker’s guidance had remained in place, Brock suspects that schools would have had more flexibility.

How much authority Damsker and his constituents in Bucks County now have is an open question. The back and forth between the commissioners, Beam, and other Wolf administration officials indicate an effort to short-circuit local government, particularly the Bucks County Health Department.

Other email records worth highlighting came from Mark Hoffman, executive director of the Bucks County Intermediate Unit, who sent the county’s updated guidance to school superintendents at the behest of McKevitt—with Damsker out of the loop. There was also an August 24 email from Rob McGee, the superintendent of the Neshaminy School District, addressed to both Ellis-Marseglia and Damsker, that should be of interest to parents.

McGee submited that when Bucks followed its own health department guidelines, he was able to keep Neshaminy students in school.

“Sadly, the attached recommendation sets Neshaminy back to conditions less flexible and conducive to quality education than last year,” McGee wrote. “CDC recommendations are a ‘One-Size-Fits All’ for the nation,” he added.

The recent legal victory cannot make up for the time students have lost in school this past year, but it can help to restore self-government and, crucially, local control. The pandemic and its aftermath taught us how dangerous “one-size-fits all” can be.