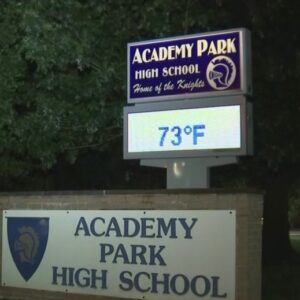 The family of Fanta Bility had what sounded like a simple request: To return to the Academy Park High School football stadium on the first anniversary of the eight-year-old girl’s passing, at the hour she was fatally shot by police, and visit the scene.

“A close family member of Fanta’s along with the family’s attorney, former homicide prosecutor Bruce L. Castor, Jr., sought to view the scene at the football stadium at the precise time and date of Fanta’s death recreating as closely as possible the lighting conditions which were present when Sharon Hill police made the decision to use deadly force,” according to a statement from the family.

But the Southeast Delco School board declined the Bility family’s request, claiming it would be “legally inappropriate.”

On August 27, 2021, a verbal confrontation turned to gunfire between a group of young men a block away from the stadium entrance. Three Sharon Hill police officers opened fire in the ensuing violence. Fanta, the youngest of six children, died in her mother’s arms. Five other people were wounded, including Fanta’s older sister.

Castor represents the Bility family in a federal lawsuit filed against Sharon Hill Borough, the police chief, and the officers involved. He told DVJournal that he and a member of the Bility family requested that the stadium lights be turned on from 8:30 to 9:30 p.m. that evening. With similar weather conditions as the night of her death, Castor and the family member wanted to see the conditions as they would have been a year ago when the girl was killed.

“I did murder cases for several decades, and I know police officers have to make split-second decisions sometimes, and light and being able to see makes a big difference,” Castor said. “If it was really well lit, then that tends to indicate the police would have been able to see what they’re looking for. We don’t consider the police officers bad people. We wanted to know what information they had at the time they decided to shoot their guns.”

But the school district declined.

As Solicitor for the Southeast Delco School District, Robert DiOrio advised the Board of School Directors it would be legally inappropriate to grant the family’s request.

“It is essentially an invitation by attorneys representing one side to participate in pending litigation,” DiOrio told DVJournal. “I am certain that Mr. Castor and the attorneys for all parties are aware of the legally proper method to obtain a site inspection in a lawsuit. Notwithstanding, I can assure you that the Southeast Delco School District Board of School Directors and Administration continue to offer their heartfelt prayers and sincerest sympathy to the Bility family in their time of great sorrow.”

Castor said the community has given the family “an overwhelmingly sympathetic response,” and he praised the transparency coming from Stollsteimer’s office. He said that was in contrast with the town and the school district, where the refusal by the school board is eerily reminiscent of the decision by the Sharon Hill council members to redact portions of the commissioned 55-page report by former Philadelphia District Attorney Kelley Hodge.

“Those blacked out areas must address the training Sharon Hill gave to its police in the use of deadly force, the means Sharon Hill measured how well its officers learned that training, and what (and the type of) simulations and continuing education Sharon Hill mandates for its officers who now face criminal charges,” Castor said. “Surely, those heavy redactions conceal deficiencies in that training, and the dereliction of Sharon Hill Borough’s elected and appointed officials who are required to send only the most highly trained and proficient officers onto the streets.”

According to Castor, the redacted report and the school board’s refusal is a collaborated effort to prevent the truth of what happened that night from being brought to light.

“The question all should be asking of their elected and appointed officials now is “why these two elected governmental bodies are so intent on keeping the truth from the Bility family, the community, and their voters?”