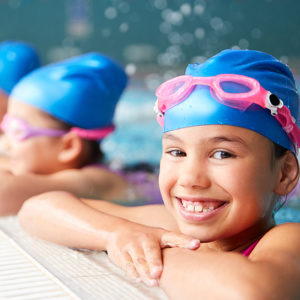 For Cullen Jones, the emphasis on learning how to swim happened as a five-year-old at Lehigh County’s Dorney Park.

Jones, now 36, would grow up to become a silver and gold medalist for the 2012 Olympics. But at five, he was just a kid “who really wanted to get on a ride in a water park with my dad.”

“I went under water for 30-45 seconds,” said the Olympian, now a father himself. “When I came to, there was a lifeguard and my father huddling over me. And the thing is, there were lifeguards, there were safety procedures, I wasn’t fooling around, I was right near my father, but I still went under. It happens so fast with little kids. But, long story short, that’s when I learned to swim.”

On Thursday, Jones, along with his fellow medaled Team USA Olympians and longtime friends, Missy Franklin, Elizabeth Beisel and Rowdy Gaines, took time to urge people to get their kids back into lessons now.

“We have all had a really hard year, as a nation, as a planet,” said Jones. “What has been happening could not have been imagined, it’s really like out of a book. But we are here to ask people to get their kids back into swim lessons, get your kids back into the pool. It can be done safely. Drowning happens all the time and this is your tool as a parent to help protect your child.”

Most pools across the commonwealth were closed after the original stay-at-home orders were put into place by Gov. Wolf in mid-March. He relaxed those restrictions in May as long as guidelines from the Centers for Disease Control and Prevention (CDC) were followed. Still, at that point in the season, many pools decided to remain closed for the year.

Many YMCA locations in the Delaware Valley are open and with limits to how many users at any given time, pools are open for lessons and lap swimming. The difference is those lessons are private or semi-private and lap swimming requires pre-registration.

While it was easy to focus on the pool restrictions as a loss of a recreational activity, the Olympian swimmers were equally concerned that children were losing out on learning a life-saving skill, as Cullen’s story illustrates.

According to the CDC, there are about 3,500 drownings each year — or 10 deaths per day. About one in five of those who die are children 14 or younger.

USA Swimming Director of Engagement Rowdy Gaines acknowledged parents have a lingering fear that the coronavirus will spread in pools, and that communities are slow to reopen their pools because everyone is in fear of the virus.

“The COVID virus cannot survive in a properly chlorinated pool,” said Gaines. “It can’t. We want to see people going back to swimming lessons. There is a pandemic, but drownings are a consistent problem in our country. People need to know how to swim.”

The medical consensus is that pools are among the safest places to be as long as appropriate social distancing is practiced.

“There’s nothing inherent about ocean water or especially pool water that is risky. The bug isn’t transmitted via a waterborne route,” Dr. Ebb Lautenbach, chief of infectious diseases at the University of Pennsylvania’s Perelman School of Medicine, told the New York Times. “Chlorine and bromine that are in pools inactivate the virus and makes it even lower risk in terms of catching it from the water.”

Jones said one of his concerns is that there will be less lifeguards to protect swimmers in the coming year, because programs are closed.

“We really need to get people back to the pools,” he said, noting that his 15-month old is in swim lessons right now. “We can do it safely.”

Jones’ teammate Beisel, who came away from the 2012 Olympics with a silver and a bronze medal, said it was crucial in her family that she learn to swim “because we were always at the beach. It was a safety thing. And that’s the important thing here, this is about safety. This isn’t about turning your kids into Olympic swimmers.”

“Learn-to-swim programs teach essential life-saving skills that should be available year-round,” said Gaines, who is also a three-time Olympic gold medalist. “Research shows that teaching a child to swim can reduce drowning risk by 88 percent.”