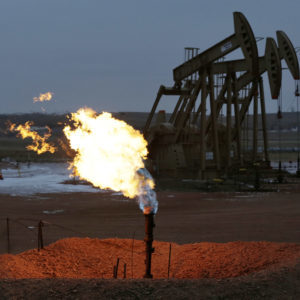 Pennsylvania and New York have taken drastically different approaches to the natural gas industry. One is looking for ways to support the energy sector and its jobs, while the other wants to kick them to the cultural curb.

New York, meanwhile, keeps finding reasons to deny permits to natural gas pipelines that energy analysts say would help lower electricity costs, which are among the highest in the nation.

“Gov. Andrew Cuomo’s detrimental pattern of siding with extreme activists by prohibiting the use of clean American natural gas is a gut-punch to hardworking New York families, small businesses and manufacturers,” said David Spigelmyer, president of the Marcellus Shale Coalition.

In February, the owner of a proposed 124-mile long pipeline that would bring natural gas from Pennsylvania to parts of upstate New York ended its four-year fight with the state. Although federal regulators gave the project the go-ahead, state officials had forced Williams Partners LP into court so many times that the company pulled the plug on the project.

Last month, Cuomo’s (D-N.Y.) administration blocked another pipeline that would have supplied natural gas to New York City residents. New York has banned hydraulic fracking for natural gas, saying it is incompatible with its climate goal of net-zero emissions by 2050.

A 2019 report from the Manhattan Institute on natural gas shortages in the northeast noted that states were wielding the Clean Water Act like a weapon against pipelines. Section 401 of the federal act lets states determine if projects encroach on protected wetlands and streams. States weigh in on this before federal action, which “essentially gives states veto power over federal decisions.”

New York is one of the states that has used Section 401 to shut down pipeline projects.

“The green left has basically captured the Governor and his administration,” said Tom Pyle, president of the Institute for Energy Research. “He has worked tirelessly to appease that constituency, which will never be pleased until they eliminate this resource. And who loses? New Yorkers lose.”

Despite an abundance of natural gas in its ground, most of the supply New York uses for electricity comes from other states and Canada. The state’s consumption fluctuates, and it ended 2018 using 1.34 million cubic units, up from 1.237 million the year before, according to the U.S. Energy Information Administration.

The Manhattan Institute noted that New York’s residential gas use jumped by 20 percent between 2008 and 2018. In 2016, environmental protestors blocked pipeline construction over the Hudson River Valley.

They were eventually unsuccessful in shutting down the project as the Algonquin Incremental Market went into service later that year carrying roughly 340 million cubic of feet of natural gas from Pennsylvania to New England.

But New York’s overall approach to pipelines has consequences beyond its own borders.

Russian tankers carrying liquified natural gas have unloaded at ports north of New York, including Boston where the product is distributed to gas companies and electric utilities. Although the United States exported 497 million cubic feet of natural gas in March 2020, according to the EIA, it imported about 2.7 million cubic feet in 2019.

In Pennsylvania, meanwhile, the state’s Department of Community and Economic Development continues working through grant applications so residents and businesses can take advantage of the low cost of natural gas.

“This program has made investments in communities throughout the state and allowed the natural gas industry to continue to bring benefits to our businesses and residents,” a department spokeswoman Casey Smith said in a statement.

“Though Pennsylvania has a vast network of natural gas pipeline infrastructure, some areas require funding assistance to construct the ‘last mile’ of pipeline to extend that network to reach more end users. … The result is the creation of new jobs in the commonwealth while providing increased access to natural gas for residents.”

Recognizing the potential of the Marcellus Shale, Pennsylvania has allowed fracking. The natural gas industry boomed there, especially in the southwestern part of the state that was hard-hit by declines in steel and coal industries.

A 2018 report from the Consumer Energy Alliance found that Pennsylvania residents saved more than $13.3 billion and commercial and industrial users saved upwards of $178.2 billion between 2006 and 2016 due to natural gas. The state has approved pipelines to move its natural gas to other states.

But even before oil prices tanked earlier this year, the natural gas market was struggling as oversupply and low prices contribute to a glut in the market. Families in Pennsylvania who had raked in royalties from wells on their properties over about the last decade are looking for buyers — and finding them hard to come by.

A report from the Institute for Energy Research found that “no major commodity had a worse 2019 than natural gas,” adding that it was the worse annual decline since 2014 with falling prices amid record output.

While some of the major energy companies are pulling up stakes in Pennsylvania, Shell is investing millions into a cracking plant that converts ethane, a byproduct of natural gas, into the building blocks for plastic. Construction slowed due to pandemic restrictions, and Shell has not indicated when the plant will be operational.

Smith said there are no specific plans at this time to support the natural gas industry, but officials continue to monitor the situation.