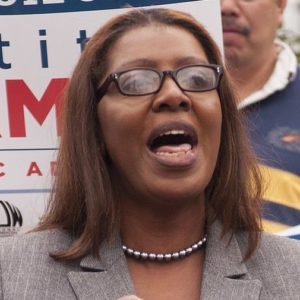 New York Attorney General Letitia James made news when she announced her lawsuit asking the courts to dismantle the National Rifle Association, but there’s nothing new about her views on the pro-Second Amendment group.

During her campaign to become New York’s top cop, she denounced the NRA as a “terrorist organization.”

The NRA fired back late Thursday with a countersuit of its own.

During an October 2018 interview, the incoming attorney general names some of the targets of her wrath: “President Donald Trump and the threat to our democracy and our values,” was one. “And the NRA holds [itself] out as a charitable organization, but in fact, [it] really [is] a terrorist organization.”

Going after one of the key activist groups on the right has already created shockwaves in Pennsylvania, widely considered to be among the five most important states President Trump needs to win re-election.

“Some Pennsylvania Democratic elected officials are panicked about the NRA lawsuit’s effect on the presidential race,” Politico reporter Holly Otterbein tweeted Thursday evening. “One told me it was an ‘October surprise’: ‘This is the equivalent of Alabama AG suing to dissolve Planned Parenthood for the left.'”

“It’s political, which I think they’re trying to do to drive a wedge between gun owners and the NRA by accusing them of fraud and trying to put them out of business,” Barrar told Delaware Valley Journal. “It’s obvious they’re not interested in finding corruption as they are bankrupting them through expensive legal fees.

“I wouldn’t be surprised if their [membership] numbers haven’t increased over the past 6 months because of all the new gun purchases that have been made out there, and more people are starting to take their Second Amendment Rights more seriously.”

The Washington Free Beacon, a conservative outlet, reported that a high-level NRA official said the association had added more than 1,000 new members each day in June of this year, and the association was ready to spend “tens of millions of dollars” in the upcoming election.

Allegations of questionable practices by the NRA leadership, in particular longtime executive director Wayne LaPierre, have been swirling for years. The gun-rights group is embroiled in an internal leadership struggle over claims of financial improprieties by LaPierre and some of his allies.

“LaPierre’s seven-figure salary, penchant for luxury clothing shopping sprees and reports that he sought to have the NRA buy him a $6 million mansion at an exclusive golf community have drawn considerable scrutiny amid allegations of rampant misspending,” the AP reported last August.

Few Americans care about the NRA as an organization, but many support the Second Amendment and see it as a bulwark on the frontlines of the political fight over gun rights.

“Every Pennsylvania gun owner I’ve communicated with views this effort to dissolve the NRA as a naked and partisan political attack. The point of this attack is not to fight nonprofit fraud but a Democrat effort to embarrass and hobble a political opponent, to burden it with expensive and debilitating litigation, and to weaponize the power of the attorney general’s office for partisan political ends.”

Gun rights supporters also dismiss out of hand the claim made by James’ defenders that she’s acting to protect gun owners from the fraudulent behavior of the nonprofit organization.

“In seeking to dissolve the NRA, James is targeting the very people she says are the victims of fraud and financial abuse: the NRA members,” says Cam Edwards, editor of BearingArms.com and host of “Cam and Company” on the now-defunct NRA.TV network. “In doing so I think she’s opened herself up to charges that this is ultimately a case motivated by politics rather than the public interest.”

Stolfer agrees. “While Wayne LaPierre ‘may not be’ a responsible leader of the NRA – New York has shown that AG Letitia James is not a fit servant of the law, the Constitution, or the people of New York.”

Not surprisingly, President Trump entered the fray soon after James’ press conference: “Just like Radical Left New York is trying to destroy the NRA, if Biden becomes President your GREAT SECOND AMENDMENT doesn’t have a chance,” Trump tweeted. “Your guns will be taken away, immediately and without notice. No police, no guns!”

In a statement provided to Delaware Valley Journal NRA President Carolyn Meadows called the lawsuit “a baseless, premeditated attack on our organization and the Second Amendment freedoms it fights to defend. It’s a transparent attempt to score political points and attack the leading voice in opposition to the leftist agenda.”

Meadows added, “As evidenced by the lawsuit filed by the NRA today against the NYAG, we not only will not shrink from this fight — we will confront it and prevail.”