I am voting for Chrissy Houlahan in the PA 6 congressional race, again. We are in different parties and will likely vote for different presidential candidates, but that doesn’t matter.

What matters is she is the right person to represent our district. Chrissy exemplifies what I like to see in a leader and public servant. She has my support because her tireless and disciplined work ethic puts problem-solving on behalf of her district first.

As the former Republican chairman of Chester County and Pennsylvania’s GOP, this endorsement has less to do with politics and more to do with substance and what matters to Berks and Chester County.

It’s important we are represented by someone who understands the district, is focused on the issues and works well with people. Chrissy does all of that.  She is also someone who seeks bipartisan solutions — someone who does not subscribe to “red” or “blue” labels but is really purple.

The first time I met Chrissy, I liked her. She is down-to-earth, serious about the job but never takes herself too seriously. She is interested in people’s perspectives. Her engineering, education, and veteran background drive her to want to know how things work. A successful entrepreneur, she is sensitive to business issues.

Her experience as a teacher developed great listening skills. When Chrissy promotes ideas and interacts with her constituents, it’s easy to see the culmination of her life’s work come together.

Before everything went virtual, Chrissy’s townhalls were a model of civility and substance. Townhalls aren’t the easiest environment, but Chrissy sets civility rules at the outset and leads by example. There is always a topic, and usually, a panel of experts to encourage a good exchange of information.

She is an active listener. She engages with people, takes notes, asks questions and is sincerely interested in what people say. Her interactions exemplify the ideals of representative government.

Process and details matter to Chrissy. On farm tours, she drives the tractor and operates the milking machine. In biomedical research labs, she engages with the scientists on what’s going on in the lab right down to the calibration of equipment.

During a tour of Longwood Gardens, Chrissy could appreciate the beauty but also needed to know about the mechanics of operating those world-renowned fountains. No matter the operation, she appreciates that how things work must be factored into policies to ensure successful outcomes.

Chrissy’s “how-it-works” worldview translates into solution-based actions focused on addressing specific ideas and issues. This approach led to the recent bipartisan support and passage of a critical veterans’ mental health package to address the epidemic of veteran suicide.

Rather than staking ground in a partisan corner, Chrissy Houlahan focuses on pragmatic solutions. Her engagement with the bi-partisan Problem-Solvers Caucus, the Caucus for Country, which is working to create a less polarized Congress, and the New Democrat Coalition, which is committed to fiscal responsibility and supporting the opportunities of capitalism, exemplify the consistency of her approach.

Endorsements by the Chester County Chamber of Business and Industry and the AFL-CIO further demonstrate her commitment to finding common ground.

Even in my most partisan days, I can say my priority was to bring people together for a common cause, a common good, and a common goal.

While democracy must always embrace and celebrate everyone’s right to an opinion, the country will be in better shape if problem-solvers from both sides of the aisle, like Chrissy Houlahan, dominate Congress. 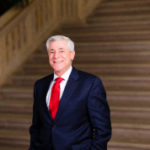 Alan Novak served as chair of the Republican Party of Pennsylvania between 1996–2005. He is also founder and president of Novak Strategic Advisors, a full-service lobbying and public policy firm, and co-founder of  Rooney Novak and Isenhour, an executive strategy firm focusing on bipartisan government solutions.