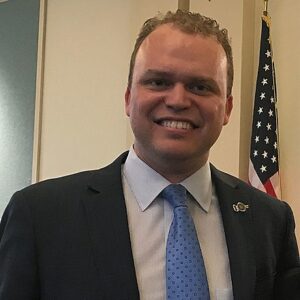 Jordan Norley has been officially sworn in as Interim West Chester Mayor to replace Mayor Dianne Herrin and fill the remainder of her 10-month term. The move makes him the 59th and 61st Mayor of West Chester.

At the virtual Borough Council meeting last week, council members voted 5-2 on a motion in favor of Norley’s appointment, as Herrin resigned her post early in order to serve as state representative of the 156th District.

Norley, the former council president, is not unfamiliar to the acting position. In 2017, he subbed for former Mayor Carolyn Comitta who also resigned her post early to serve in the same legislative seat. “I see nothing but hope and opportunity for West Chester,” Norley told council. “I’m truly humbled, grateful, and honored.”

Norley says his first priority as mayor will be creating an ad hoc diversity task force committed to achieving racial diversity in the West Chester Police Department. Additionally, he will look to finalize the department’s strategic five-year plan, while providing transparency in the budgeting process for residents and elected officials alike.

As Norley gets to work, five candidates have already filed for the May 18 primary to become West Chester’s next mayor. So far,  candidates include Don Braceland, Lillian Debaptiste, Kyle Hudson, Eric Lorgus, and David Baldino.

Braceland, current council member and co-founder of Bryn Mawr Hospital’s hospice program, says he’s running because of his experience and love for the borough. “I’m the only candidate with the most recent municipal and local government experience. I know things that need to be worked on, and I also know things that don’t need to change all that much.” If elected, Braceland says he would make an aggressive effort to get minority candidates into the police force, particularly Latinos.

“Our Latino population is completely underrepresented. I’m also interested to come up with more affordable housing in the borough. The borough is small, tightly packed, we have a population of 20,000 residents, about 60 percent of whom are renters, and it seems that whenever they build housing here its higher end housing. That’s not what we need.”

Lillian DeBaptiste, director of DeBaptiste Funeral Homes, Inc. and lifelong borough resident brings a wealth of behind-the-scenes political experience to the table. Her father, Clifford DeBaptiste, served as mayor from 1994 to 2002 and was the borough’s first Black mayor. “As a funeral director, I have the opportunity to help people move from chaos to calm,” she says. “I help them find the calm on the other side and see them when they are at their most vulnerable and need direction. I’m ready to make a difference and keep West Chester moving forward.”

Progressive Democrat and creative director at Crimson Planet Media, a digital marketing agency, Kyle Hudson ran unsuccessfully for mayor in 2016, but says he has since studied local government and knows what it takes to lead. “I learned how government works, how ordinances get passed, and who to talk to. West Chester is the longest place I have ever lived, and it gave me every opportunity I have, so I feel compelled to give back.” Hudson will campaign on a safe response to Covid-19, forming an addiction task force to battle the opioid crisis, and helping businesses flourish again post-pandemic.

Eric Lorgus, entrepreneur, former borough council member, and self-described “independent-minded Democrat,” is running on his business acumen and hands-on work in the community for over 40 years. “When I see a problem, I get involved. Sometimes it’s not so much a problem but an interest.” Lorgus would not seek to make any major changes, instead focusing on helping residents recover from the pandemic as well as diversifying the police candidate pipeline.

David Baldino, former Henderson High School swimming star, is running because he loves the borough’s rich history. He will campaign primarily on aiding small businesses impacted by the pandemic in addition to combating the opioid crisis.