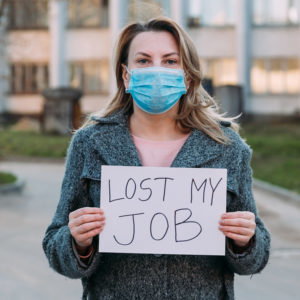 Woman in mask holds sign lost my job. Concept of job loss due to COVID-19 virus pandemic. Female stands against background of business center
[IS] Opinions

No Money, No Pay, No Choice: The Ticking Economic Bomb

We are in the shadow of an economic collapse of 1930s proportions. That is the awful reality of the current and relentless surge in COVID-19 infections. What looked bad a few weeks ago now looks worse.

The first horror is the coronavirus itself. The second is the devastated economic and social order it will leave behind: A landscape where the structures of society are leveled and will have to be replaced not by the old, broken structures but by new ones.

The economy won’t come roaring back in a classic V, as so many hope and even believe.

Parts of the economy are undergoing massive leveling of near-biblical proportions. Tens of millions of us are raring to get back to work, to resume where we left off. But for many, there will be nowhere to return to: They will be economic refugees, contemplating a swath of destruction where their jobs used to be. They’ll find there is no there there.

Jobs in retailing, restaurants, bars, hotels, cinemas, sports facilities and travel have already vaporized. Behind those subtractions from the economy are their supply chains. Visible jobs lost are just the beginning. When economic collapse begins, it spreads as devastatingly as COVID-19 in a crowded barroom.

There is brutal irony when, after the virus, the second subject on the national agenda is the plight of minorities. Sadly, they are overrepresented among the workers at the low end of the economic food chain.

It is those who make the minimum wage or just above, those who live off tips, day work, commissions, pick up assignments — the whole shaky lattice that makes up the employment pyramid — who are set to be hurting badly when unemployment runs out.

Every damaged industry, like retail, has its collateral damage.

Close a mall and the hurt spreads after the clerks and warehouse workers are gone, from cleaners to building maintenance workers, to supply chain workers, to advertising professionals and the newspapers where those ads might have appeared. Like the coronavirus itself, economic contagion spreads wide and fast.

Politicians and social engineers keep trying to promote the working class to the middle class, but they remain at the bottom — those who feel every bump in the economic road.

Across the nation, a debt bomb is about to explode with huge consequences for those who are now or about to be jobless — and by extension the whole economy. Delayed rents are going to come due with a concurrent wave of evictions affecting millions.

Credit cards — the modern slavery for those with little money — must be paid, except they won’t. At almost 30 percent interest, which is what many are paying, the debt will overwhelm the users. In time, as accounts fall into arrears and payments cease, it will begin to drag down the issuers.

An incendiary component of the debt bomb is health care. People rushed to hospitals are going to have medical bills in the tens of thousands of dollars. They won’t be able to pay. No money, no pay, no choice. If the pandemic goes on long enough, the insurers, for those who are insured, will begin to hurt.

But mostly, it will be the hospitals that will go after the patients for payment because they’ll have no choice. Real inability to pay is the fuse that will light the debt bomb. Multiply this by those who need other health care and are not insured.

Most thinking in the political class has revolved around an expectation that come the fall, there will be a vaccine that will be available and affordable by all and it will turn night into day, ending the horror. That isn’t assured.

Already, to be sure, we are finding therapies for use in infected patients, the steroid Dexamethasone, for example, and other off-label uses of existing drugs. But that doesn’t immunize the population, and whether immunization is possible and how fast it will come isn’t known.

What is known is the unfolding economic catastrophe for tens of millions of Americans and their possibly permanent loss of jobs.

When Europe lay in ruins after World War II, the United States stepped in with the Marshall Plan and wrought an economic resurrection. A Marshall Plan for America? I think so. The need will be very great.