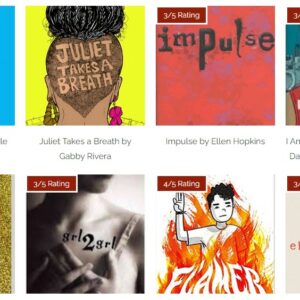 Some books on the rated books website for WCASD.
News

Parents around the country are concerned about explicitly sexual books in their children’s schools.

A website developed by a Utah mother lists a number of those books with excerpts and also rates the content of books from 0 to 5, with 5 being the most explicit. A teacher living in the West Chester Area School District, who is also concerned about the books children are being exposed to in their school libraries, identified books and began an offshoot website for WCASD books.

“For the past several months, I have been part of a team that has been doing a deep dive into the obscene books in the West Chester school district’s libraries,” said the teacher, who asked that their name not be used out of fear of potential retribution. “This has culminated with the creation of a website that contains all of the obscene titles, along with excerpts from the books. This will serve as a one-stop resource for parents, residents, political leaders, and anyone else with an interest in protecting our children.”

The books that many parents find objectionable are not just books related to LGBTQ topics, but also graphic discussions of heterosexual sex.

“There’s a lot of straight content that’s just as explicit,” the teacher said. “Or violent. Or includes drugs. It’s all explicit. It’s got obscenity in it.”

“The sole purpose (of these books) is to corrupt,” the teacher said. “They are downright sexual and have cartoons. They’re pushing an agenda.”

“We tried to have ‘Gender Queer’ removed” and were not successful, the teacher said.  However, the West Chester Area School Board “decided to keep that book.”

A spokeswoman for the district did not respond to a request for comment.

Website creator Brooke Stephens, a mother of four living near Salt Lake City, said she discovered the problematic books when she was given a copy of  “All Boys Aren’t Blue.” It is a memoir by George M. Johnson about his experiences growing up LGBTQ and his first experiences with sex.

Stephens decided to take action. She has spent hours reading the books and creating her website.

Ironically, she and her family moved to Utah from California because they wanted to live in a more conservative area, but she found the public schools have the same books on their shelves.

“There’s a problem with very sexualized content,” she said. When she asked the Davis School Board to remove the book, it refused. Thatwas when she decided to create the website.

Stephens blames the American Library Association for the graphic books turning up in school libraries nationwide. It cites the First Amendment to promote these books with school district librarians, but fails to take into account whether they are age-appropriate, Stephens said.

The Library Association did not respond to a request for comment.

Stephens sometimes shows people the content so they believe her and they tell her, “’I wish you’d never shown me this. It is so graphic.’ You can’t unsee it,” she said.

There is “truly obscenity, truly vulgarity that is harmful to minors,” she said.

Stephens is working to review school library books with other parents in Utah Parents United and No Left Turn In Education, which was begun by Lower Merion parent Elana Fishbein.

Stephens said while she wants educational content to be inclusive, she does not think it needs to be so graphic. For example, the books in category 5 include discussions of bestiality and necrophilia.

“Who doesn’t want to be inclusive?” Stephens asked.

She urges parents to be aware of what their children are reading.

“There are probably thousands of parents out there that have no idea that these books are in the school libraries,” the local teacher said. “And unless they come to the school board meetings, or have social media contact with people who do know, they’re not going to find out. So this was an easy way to provide a one-stop resource.”

Parents should take a look at the website and see the books their children could be reading that are in the school libraries, the teacher said.

“If you don’t like what you see, you need to start speaking up or you need to make sure your kids don’t read them,” the teacher added.