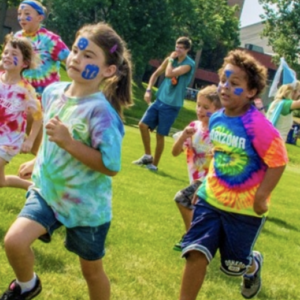 “Last year we were on a waiting list for quite a while and she got in,” said Taylor. “We were going to start in September…And they had to close the baby room and the young toddler room because they did not have enough staff. And our daycare was not able to re-open that room. She did not get back into daycare until the end of May of this year.

“During that time we were on several other waiting lists and we were not able to get into any other daycare center,” said Taylor. She and her husband cobbled together childcare, relying on her mother, mother-in-law, other family members, and friends.

The problem is a dire shortage of childcare workers, according to Donna Cooper, Children First executive director, discussing the child advocacy organization’s new report about how Delaware County’s 123,94 children fared during the COVID-19 epidemic and its aftermath. There are 52 fewer childcare programs and 540 fewer staff members than before the pandemic.

Childcare workers typically make 23 percent less money than people employed in stores, such as Wawa, she said. And the lack of childcare is a factor keeping women from returning to the workforce.

The report found that while 1,900 adults succumbed to COVID in the county, no children there died of COVID. And many families took advantage of the federal child tax credit and other government funds so that more than 3,000 children were no longer in poverty. Some 29,000 Delaware County families received over $50 million because of the child tax credit.

However, many students fell behind or further behind in school, more are suffering from mental health issues such as suicide and anxiety, and fewer children are vaccinated against communicable diseases.

”Pennsylvania’s statewide Safe2Say hotline fielded more suicide-related calls from students across the state during COVID, yet the number of these calls from youth in Delaware County jumped by 43 percent,” the report said.

“The children faced extraordinary anxiety,” Cooper explained. The closure of the Crozer-Chester Health System left a big hole in mental health services, she said, “so entirely new networks have to be built in the county. Estimates are that 14,000 teenagers in Delaware County still are suffering from some remnants of the stress, the anxiety, and the isolation and depression that COVID imposed on their lives.”

Students in some school districts fared better than others, the report said. But some 38 percent of the kids were not testing at grade level before the pandemic.

“The higher a school district’s poverty level is, the more the kids were behind,” Cooper said. “As your poverty rate goes up your assessment score goes down. Not because the children aren’t smart enough. But they are the same school districts that have the least amount to spend per child, so they have swollen class sizes, they have less instructional support…We have a gap of $150,000 per classroom between Radnor and Upper Darby or between Radnor and William Penn.”

Schools that have the greatest risk of children falling behind are the schools that were closed the longest, she said.

“They were also the schools that had the least resources,” Cooper said.

Critics of the extended closed-classroom policies say these numbers add to the evidence that the approach taken by many public schools in Pennsylvania and across the U.S. was flawed. A report released earlier this year by the left-leaning Brookings Institute found nationwide “test-score gaps between students in low-poverty and high-poverty elementary schools grew by approximately 20 percent in math and 15 percent in reading primarily during the 2020-21 school year. Further, achievement tended to drop more between fall 2020 and 2021 than between fall 2019 and 2020, indicating that disruptions to learning have continued to negatively impact students well past the initial hits following the spring 2020 school closures.”

The Delaware County report recommends the county prepare for a future public health emergency by having a person whose job is to think about kids and to create a manual of lessons learned from the COVID pandemic. County districts received substantial federal support in pandemic funding and the state also put $1.1 billion toward education this year, according to Cooper. But they need to do more to make sure the kids caught up.

To make sure there is not a spike in poverty, the Senate needs to reapprove the child tax credit, she said.

Upper Darby High School student Tanveer Kaur said many of her friends had trouble with mental health problems. She joined a support and affinity group at her school and also volunteers as an assistant teacher at one of the elementary schools.

Those students have “missed out on crucial learning blocks that build up,” Kaur said. “And that missing of crucial education has really impacted them.”

“Because class sizes are so big even at the elementary level, it’s hard to have that one-on-one time,” Kaur said, even with two adults and a teenager in the classroom.

Seda Gok, a middle school counselor in the William Penn School District, said she supported students online during the pandemic. They felt isolated, had trouble with the virtual curriculum, and were falling behind, leading to anxiety. Some students were helping younger siblings with their schoolwork. And they worried about their parents getting sick.

“Now we’re in our first semi-normal school year…They’re so behind now. They’re just now starting to play catch-up. There was that anxiety of (taking the) PSSAs (standardized tests) that was a big concern, too.”

She said it was hard for them to learn math in virtual learning.

The students need access to more mental health support staff, she said. She is responsible for 355 8th grade students “so it’s really hard to give each student that time.”

There are also “huge waiting lists” to see an outside therapist.

While William Penn has 25 to 30 students in a class, for kids to need remedial help, class sizes should be no more than 17 to 30 percent, said Cooper.