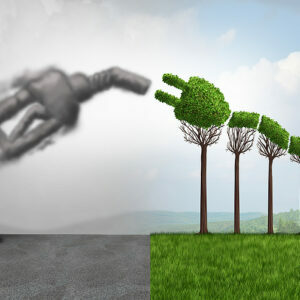 Similar to most Americans, the high cost of gasoline is something I must consider as I move across the country. Either by car or airplane, it just costs more to get around.

Like clockwork, gas prices are also becoming politicized. Republicans want to blame President Biden, and the White House is trying to offer solutions that will do little to bring down gas prices. After all, the cost of a gallon of gas is mostly reflective of the price of a barrel oil, which is set on world markets and affected by everyone from the Saudis to Russian President Vladimir Putin.

With such unsavory forces in control of energy prices, it is only natural for the American people to demand answers from lawmakers about lowering gas prices.

But the harsh reality that many people don’t realize — or even acknowledge — is that our oil addiction is hard to break because we lack alternatives to replace petroleum that are cost-effective and secure.

One possibility offered, traditionally by progressive Democrats, is a full transition from gas-powered vehicles to electric vehicles, or EVs. Indeed, the Green New Deal touted by lawmakers like Sen. Bernie Sanders of Vermont and Rep. Alexandra Ocasio-Cortez of New York calls for “reaching 100 percent renewable energy for electricity and transportation by no later than 2030.”

It would be a wonderful thing for our planet, to walk away from petroleum and all drive EVs. But, we need to be honest about the challenges posed by EVs.

First, there are national security concerns. Specifically, China dominates the markets for rare earth metals, which are critical components for the batteries that power EVs. We don’t produce these mineral commodities — like lithium — in America. Even if we managed to tap into lithium resources domestically, China still controls cathode and battery manufacturing.

China would use this power over America as leverage to get us to bend to its will. Let’s not beat around the bush, China has become a totalitarian regime engaged in genocide. Beijing shows little respect for people’s basic human rights. With this in mind, do we want to both enrich China and depend on them to power our economy? Of course not.

Second, EVs are more expensive than gas-powered vehicles. How can we demand low-income Americans to spend more on their car or truck? If we want to subsidize the purchase to make an EV affordable for every single person, through tax credits or cash rewards, a good part of our nation’s budget will be dedicated to this endeavor.

Third, the American people are not in favor of going all EV. My organization recently commissioned a poll on this matter, and consider these findings:

—41 percent of respondents believe the shift toward EVs is happening and that additional federal investments are “not an effective use of taxpayer money.”

Our poll is clear: there is not the political will to spend billions of dollars to help people afford EVs. Think about this, every American without a driveway will need to have access to a publicly subsidized charger. How can the government possibly provide this charging capability to everyone? With skyrocketing inflation, Americans are simply trying to afford basic necessities. It’s no wonder EVs are lower on their immediate priority list.

Ultimately, I can foresee a future that is fully EV. Many of the challenges facing EVs could be resolved through innovation and smart government investments in clean technologies. But until we get there, let’s be realistic about EVs, and continue to support policies that help make gas-powered vehicles cleaner, and more fuel efficient.

Hank Naughton is with Centrist Democrats of America. He is a former Massachusetts state representative and now practices law. He wrote this for InsideSources.com.