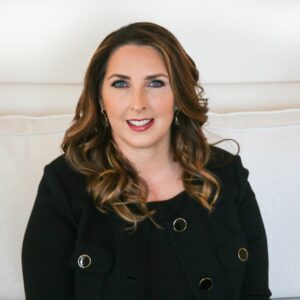 Republican National Committee Chairwoman Ronna McDaniel is bullish on her party’s chances both this year and in 2022.

The current election “is helping us prepare for next year with our ground game,” McDaniel said. “It’s a test run, so it’s going to be critical with our turnout this November to measure and see how we’ll do in the midterms.”

In addition to congressional races and the governorship, Pennsylvania voters will be choosing a replacement for Republican U.S. Sen. Pat Toomey, who is not seeking another term. The GOP hopes to retake both the House and the Senate which Democrats now hold by narrow margins.

“The midterms are always a referendum on the party that has the power,” she added. “That’s historically the way it is and the Democrats have the House and the Senate and the White House. As we are watching unemployment rise especially here in Pennsylvania, we’re watching more people leave the workforce, we’re watching the labor shortages, we’re watching inflation, energy prices going up, what’s happening at the border, all of that is a referendum on the Biden administration. And right now based on the polling that we’re seeing, the American people are not pleased.”

A recent poll average finds President Joe Biden with a 42 percent approval rating. It has fallen faster during his first nine months in office than any president in the modern era. But that doesn’t mean Republican candidates can coast and expect to win.

“I think my message to every Republican candidate is to know your district, know your community, invest in retail politicking, and don’t take anything for granted. And run on the issues that the people in your constituency believe in. And if you run your race and you really do that work, we’ll win,” she said.

One reason that former President Donald Trump lost the 2020 election was he lost the support of suburban women. But McDaniel believes women are coming back to the GOP in droves due to Democratic policies. 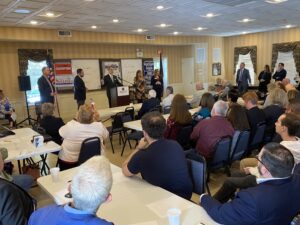 “We’re seeing women come back for a variety of reasons,” she noted. “A lot of it is having to do with the failed leadership of the Biden administration. We’re seeing gas prices go up. As moms, we understand what that means. I get that as a mom. We’re seeing our groceries cost more. We’re seeing everything cost more. And we know that inflation is affecting our families, and the border, national security and I think what’s happening in the schools, when you see in Virginia, a Democrat candidate say that parents have no right to have a say in their children’s education, that’s really resonating with women and moms across the country, especially in the suburbs. I know I’m one of them.  And what we’re seeing is a huge influx of people running for school board and it’s bringing women back to the Republican Party.”

Republican judicial candidates also attended the Doylestown event and were introduced to the party faithful.

The state Supreme Court, which now has a 5-2 Democrat majority, made several rulings regarding mail-in ballots in 2020 that some Republicans believe helped swing the presidential election to Joe Biden.

“I think that’s why these court races are very important,” said McDaniel. “Court races are critical because you can have a legislative session, one bad court ruling can overturn what happened legislatively. And a lot of times court races and judicial races are not given the attention they deserve, especially compared to the impact they can have on a state and no state understands that better than Pennsylvania. So every race is important. Obviously, these are the focus right now and the RNC is building a ground game to help the whole ticket.”

McDaniel, a Michigan resident, has two children, one a junior in high school and one who just left for college.

“They were both pandemic kids. She was a pandemic senior,” said McDaniel. “It’s so hard and she did not get a senior year like so many kids. We really watched our kids struggle. We’re all navigating it. But I certainly do not think I should not have a say in my kids’ education. And my voice matters, just like every other parent across this country.”

McDaniel, 48, has been the National Committee Chair since 2017 and enjoys the job.

“I love traveling the country and meeting people, being in Bucks County today and meeting your county Chair Pat Poprik, seeing her and how hard she works. Everywhere I go, I get to meet amazing people. I love that. It’s also the thing that’s the hardest, traveling and being away from my family. I love seeing the whole great nation that we live in and the variety and the difference in every single state,” McDaniel said.