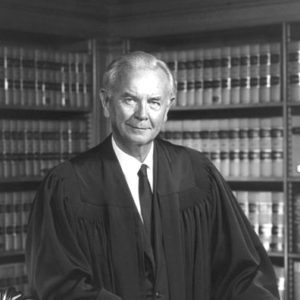 Must A Court Vacancy Become a Political Nightmare?

History often repeats itself. Before treating the present Supreme Court vacancy as an unprecedented circumstance, consider that actually we’ve faced a similar circumstance before.

The year was 1956 and Dwight D. Eisenhower was heading into a re-election race when an unexpected opening on the Court occurred.

Justice Sherman Minton — a judicial moderate conservative — and a former U.S. senator (making him the last elected federal official to make it on to the Court) resigned from the Court due to illness.

Appointed by President Truman to support the New Deal agenda, Minton would become a vocal advocate of judicial restraint on the Supreme Court. For nearly eight years on the highest court Minton was a walking example of the ability of a judge to separate his or her personal political agenda from judicial rulings.

Unfortunately, Justice Minton suffered from a rare Vitamin B-12 deficiency (known as Pernicious Anemia). His symptoms — fatigue, memory loss, lightheadedness and weight loss — had become so severe that he abruptly retired from the Court in October of 1956 (with less than four weeks to go before the 1956 election.)

Eisenhower was running for re-election facing Democrat Adlai Stevenson (again). A little more than a month earlier Eisenhower had suffered a massive heart attack which initially unsettled the election dynamic.

He faced a dilemma.

Having already appointed two Justices to the Court, he could wait until after the election and minimize the Court’s impact on his race or he could go forward with a nomination and potentially disrupt the election.

He made a recess appointment — the last one we’ve seen on the modern Supreme Court.  His choice, William J. Brennan, would join the Court as a recess appointment, participate in over a half dozen cases, yet still manage to receive a voice vote confirmation in 1957.

Contrary to precedent and Article III of the U.S. Constitution, progressives say that RBG’s vacancy should not be filled by Trump. Instead they argue that the Ginsburg seat is historically “owned” by the left and consequentially shouldn’t be filled by a conservative.

However, that is exactly what President Bill Clinton did when he appointed Ruth Bader Ginsburg to the Court in 1993. Byron White — one of the two votes against Roe v. Wade — a conservative on the court was replaced by Ginsburg. Using their logic, if a conservative jurist takes the “Ginsburg seat,” it would be returning to form.

Contrary to the Constitution’s clear mandate for the president, progressives claim that they will eliminate the Senate filibuster, pack the Court and maybe even add new states if the president goes forward with plans to replace Ginsburg.

Just as worrisome are the outside voices that hint that violence will ensue over Ginsburg’s replacement.

Former CNN host Reza Aslan tweeted: if Republicans seek to fill the vacancy, “we burn the entire f***ing thing down.” Not to be outdone, a GQ columnist promised that “there will be riots” if the President replaces Ginsburg.

In 1956 — less than a month before the election — partisans sat on the sidelines and allowed the Constitution’s outline to guide the incumbent president’s actions. It is quite telling that such an approach has been largely dismissed today.

After the recess appointment, Eisenhower’s campaign would recover and he’d go on to win a landslide re-election carrying 41 states in the process. Furthermore, his recess appointee would be confirmed without a second thought early the following year.

Today partisans claim that nominating a replacement for Ginsburg could overwhelm this year’s federal elections.

One solution that the president could take would be to follow Eisenhower’s example: recess appoint Amy Coney Barrett to the seat and then nominate her after Thanksgiving.

Putting her on the Court now would guarantee that it has a full complement when, or if, it faces election-related challenges and ensure the Court could issue final binding rulings while also making sure that Congress isn’t overwhelmed with the politics of a vitriolic confirmation.

Amy Coney Barrett, a devout Catholic and mother of seven from Indiana, is a Notre Dame grad and presently sits on the 7th Circuit Court of Appeals. There for the last three years she’s created a reputation as a serious scholar committed to judicial restraint and the U.S. Constitution.

If successfully confirmed to the Supreme Court now at 48 years of age, she could easily serve 35 years.

Importantly her addition to the Court would go a long way toward making the Supreme Court an unwelcome place for litigants seeking to impose unpopular left-wing social schemes under the guise of Constitutional law on the American people.

Horace Cooper is a senior fellow with the National Center for Public Policy Research and author of the recently published: “How Trump is Making Black America Great Again." He wrote this for Delaware Valley Journal.