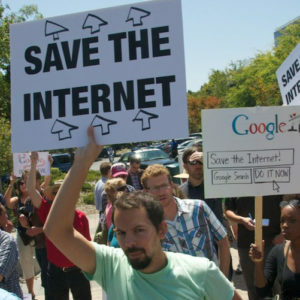 MURRAY: A Proposed Law Would Break the Internet

The U.S. House of Representatives is considering a law that would break the internet as we know it. Dressed up in legalese as a ban on “self-preferencing” by large platform companies, the effect would be to make the internet much less useful and valuable to all of us. Whatever you may think of big tech, you should be concerned.

The bill is part of a package of laws aimed at increasing the power of antitrust authorities to go after large companies. The law in question, the American Choice and Innovation Online Act (HR 3816), purports to increase competition by banning large platforms like Amazon or Google from promoting other services or products that the platforms themselves provide when that offering would compete with another company using the platform. This practice is known as “self-preferencing.” Quashing this practice may sound intuitively right, but switching to such a prohibitive policy would conflict with the way we use the internet and, beyond, with the way commerce works outside the virtual world.

As shoppers, we are all familiar with the way drug stores stock their shelves. Besides the brand-name product is the pharmacy’s own-brand equivalent, at a more affordable price and often with other incentives such as store loyalty points or buy-one-get-one offers. Grocery stores work the same way, with own-brand chips in the same snack aisles as the big brand names. Self-preferencing is all around us, and no one bats an eyelid. Indeed, the name brand manufacturer sometimes makes the own-brand product that competes with its flagship product.

So, when Amazon offers you an Amazon Basics product alongside the product you’ve searched for, it’s simply the digital equivalent of that practice. Very often you’ll choose the brand name, but sometimes, especially for the budget-conscious, you will be glad for the choice. That is not an anti-competitive practice. If anything, it increases competition (or at least choice) from the viewpoint of the consumer.

It’s not just own-brand products, however, that the proposed law would change. The bill would also make it more difficult for a search engine to add their own maps/directions when you search for a museum name, for instance, because that would compete with dedicated map companies that would like you to use their product. That’s a win for the competitors but not the consumer, who is now short one choice and has more steps to go through to get the information they seek. It might even mean that Google couldn’t include a link to your Gmail account in the corner of a page of Google search results.

Then there’s another form of self-preferencing called “tying.” This is where a company requires you to use another of their products as a condition of using one. Tying actually provides a lot of consumer benefits. For instance, there probably wouldn’t be such a thing as a $50 smartphone if Google hadn’t conditioned cost-free use of its Android operating system on the inclusion of certain Google apps. This bill could even make Amazon’s Prime service of free shipping or its video streaming illegal.

Finally, there’s a provision against discrimination in how a platform presents its results. As a colleague of mine says, this is akin to saying “All search results must come first.”

The fundamental problem with the bill is that it puts a company’s competitors first rather than consumers. The entire purpose of American antitrust law, as courts have found since the 1970s, is to promote the welfare of consumers, not competitors. This bill turns antitrust law on its head by favoring competitors over consumers. If it passes, we’ll find our consumer experience of the internet broken.

Iain Murray is vice president for strategy for the Competitive Enterprise Institute. He is the author of the book “The Socialist Temptation.”