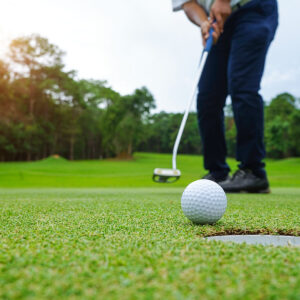 One year ago, at the height of the pandemic, area golf courses were full. Despite being shuttered for some six weeks in the spring of 2020, clubs were reporting a significant increase in play by the season’s end.

That trend has continued unabated in 2021. Even as COVID-related restrictions have been lifted to allow for a wide range of recreational activities, the golf surge remains in full swing.

At Commonwealth National Golf Club, a private club in Horsham, Head Golf Professional Dan Mrozinski said his members are rediscovering their love of the game.

“I think they forget how much fun it is,” he said. “It’s kind of amazing the amount of passion people have for it.”

Mrozinski estimates rounds at his club were up some 25 percent in 2020 over 2019. and have increased another five percent this year. 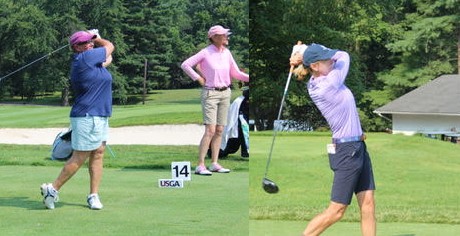 Lisa Day (on the left} is a teaching professional from Coatesville.
Stephanie Harris on the right is an amateur from Furlong.
Both were competing recently in a U.S. Senior Women’s Open qualifier in Riverton, NJ.

The uptick in play at Commonwealth National reflects a nationwide trend. The National Golf Foundation reported 502 million rounds of golf were played in the U.S. in 2020. That’s an increase of 14 percent over 2019, even though more than half the nation’s 16,000 golf facilities were closed for much of March and April last year because of the pandemic, a circumstance the NGF estimates cost courses some 20 million rounds.

So far this summer rounds played is still rising. In May, the last month for which complete statistics are available, rounds were up 18 percent over May of last year, when courses in some parts of the country were still enforcing COVID restrictions.

The Union League at Liberty Hill, a private club located in Lafayette Hill, is under new ownership this year; it previously was The ACE Club before it was purchased by the Union League of Philadelphia, a social club.

Matt Walbert, who took over as the club’s head golf professional this season, believes the increase in play is, in part, because of golfers who are returning to work following the pandemic but are making time for golf in their schedules.

“I think the trend, from some of my peers outside the (golf) industry that work the Monday through Friday in an office, the ones that are going back, it seems like they’re on a split schedule,” he said, “where they’re maybe only going to the office two or three days a week.”

Walbert says many golfers, both new and returning, were drawn to the courses during the pandemic because it allowed them to enjoy being outdoors.

“I think everyone enjoys being outside,” he said “whether it’s with friends, your parents, grandparents, sons, daughters. 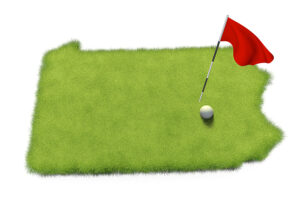 “People enjoy being outside with their family or friends and last year that opened a door for so many people to be able to do that as a safe outlet and captured a captive audience that golf needed to capture.

“We see it with our junior golf, how many juniors have really come into the game, and how many high schoolers, boys and girls in college that are going to stick around (the game) for a while.”

Walbert says the one element that may slow the growth of the game is the time required.

“In the past, it was always cost that was a big issue,” he said. “Now, it’s the time commitment.”

Walbert expects the industrywide increase in play to slow down at some point. “I’m fairly confident this trend will level off,” he said. “If it does, it’s not going to decline to the point that we saw in 2019. I think we will still see an increase from 2019 numbers, it just won’t keep climbing like it has in 2020 and halfway through 2021.”