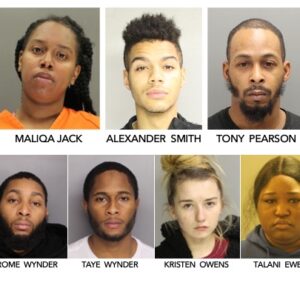 Those arrested are believed to have funneled dozens of guns into the streets. Four of the defendants bought 31 guns from firearms dealers in Montgomery, Berks, Bucks, Lancaster, and Philadelphia counties,  the district attorney said.

The gun trafficking organization was fueled by a 22-year old man from Plymouth Meeting, Quinn Whisted, who purchased 17 firearms and faces the most charges.

Steele pinpointed a specific incident, a selfie video found on Whisted’s phone in which he spits on a memorial of Montgomery Township Police Officer Bradley Fox, who was killed in the line of duty in 2012. Whisted also praised the man who shot him in the video. 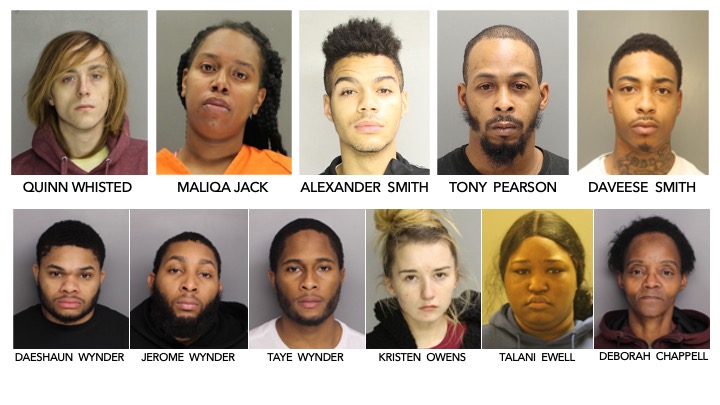 “He was well aware of what he was doing,” said Steele, noting that one of the firearms was recovered by Philadelphia police during an arrest for a home invasion robbery on January 7. “Well aware of the effects of it.”

The investigation was spurred by another gun trafficking ring investigation last September. The two organizations are not connected though, said Steele.

Law enforcement began following multiple purchases of firearms by Whisted through the Electronics Record of Sale (EROS) system for gun purchases, as well as paper forms for the Alcohol, Tobacco and Firearms (ATF) federal agency and the Pennsylvania State Police.

“These cases are time-consuming to investigate,” said Steele, adding there was “devastating” evidence found on social media and on suspect’s phones.

Investigators were targeting “straw” purchases, where one person with a clean record would purchase a gun and turn around and sell it to someone who is not allowed to own a gun – some because of mental illness and others for criminal history, including domestic abuse.

Alexander Smith, one of the defendants, was purchasing “ghost gun” materials from websites and assembling the guns, then offering them for sale.

“Ghost guns” are made from firearm assembly kits and built without a serial number. They do not require the purchaser of the kit to undergo a background check and lack traceability, which is where the “ghost” comes from. They are illegal in several states including neighboring New Jersey, but are legal in Pennsylvania.

Steele said the case points to the need to make “ghost” guns illegal in Pennsylvania as well, and to get all gun shops and dealers on the EROS system to reduce processing time.

Of the 29 straw purchases identified during the investigation, six have been recovered: the one that Philadelphia police seized during a January arrest for a home invasion robbery; four firearms recovered during traffic stops; one was seized during the arrest of Alex Smith; and three that were returned. That leaves 20 guns unaccounted for, Steele said.

Many of the suspects took lengthy trips to buy the guns. “If someone drives from Philadelphia to Lancaster to buy a gun, that’s a red flag,” said Steele.

Besides the 22-year old Whisted, those arrested include:

Jack, Prince, and Chappell bought the weapons for a gun trafficking organization run by:

Twelve of the 14 were arraigned and bail was set on Wednesday. Two defendants, Tymir Allen, 22, of Philadelphia, and 26-year old Joseph Zummo of Bridgeport, are still being located by detectives.

The case will be prosecuted by Assistant District Attorney Lauren Marvel, who is captain of the Pottstown Community Justice Unit, and Assistant Director Attorney Samantha Arena of the Firearms Unit.