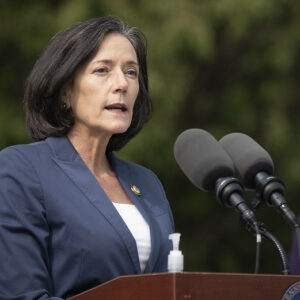 “It’s perfectly clear, undated ballots, pursuant to a decision of the Pennsylvania Supreme Court, are not to be counted,” said Thomas King, general counsel for the Republican Party of Pennsylvania. The decision King is citing is a split ruling by the state Supreme Court that undated ballots could be counted in 2020, but the decision does not apply to 2021 by virtue of an opinion by Justice David Wecht.

During the 2020 election, the U.S. Supreme Court said election officials in Pennsylvania could count absentee ballots received as late as the Friday after Election Day so long as they were postmarked by Election Day.

“Our interpretation of the law on this matter is that these ballots can and should be counted, just as they were in 2020,” said Kelly Cofrancisco, director of communications for Montgomery County. “There was no objection raised at the canvassing of these ballots, and therefore they were not segregated.”

“While I still believe that the absence of dates is an inadvertent clerical error and should not be used to disenfranchise any eligible voter, I also agree that we must uphold the requirements set forth by the Commonwealth of Pennsylvania,” Sabir said.

“Anytime you have a split decision, you have to discern the holding by looking at all of the opinions in tandem,” said Shohin Vance, an election law attorney who argued the case in 2020 against counting undated ballots. “Here Justices Wecht, Dougherty, Mundy, and Saylor all made it clear, the Election Code prohibits counting undated ballots.  Justice Wecht opined undated ballots could only be counted in the 2020 Election, whereas Justices Dougherty, Mundy and Saylor believed they shouldn’t have been counted in 2020 and beyond.”

William McSwain, the former U.S. Attorney for the Eastern District of Pennsylvania, told DVJournal counting these ballots is clearly illegal.

“What leaders are supposed to do is, they’re supposed to respect and follow the law and not take the law into their own hands,” said McSwain. “And the law is clear…Undated ballots are not supposed to be counted. And so any election official that is counting those ballots has essentially violated his or her oath, in my opinion, (and) should be removed.”

“We hear daily from despondent voters who say they will not vote again because they no longer trust the election system given these direct experiences of Montco voters,” said Montgomery County GOP Chairwoman Liz Preate Havey. “Montgomery County’s decision to ignore the law and the guidance from their own Department of State and governor has sent a clear message to these disenfranchised voters – that the Democrats are not committed to protecting against voter fraud. Even the simplest rule will be broken.”

While it appears the number of undated ballots would not alter the outcome of any of the races on the ballot, the issue is likely to return for the 2021 general election in November.

Judicial races in Pennsylvania have come down to the slimmest of margins – in 2003, retiring Judge Susan Gantman won by 28 votes, and in 2019 Judge Megan McCarthy King won by only 16,238 votes.  Both parties are likely to scrutinize every county’s voting procedures, with the understanding every vote can make a difference.

The House and Senate have been working on updates to the commonwealth’s election code since the session began in January.  While Senate and House Republicans have made it clear they believe ballots need to be dated and signed in order to be counted, many Democrats have taken a different stance.  It is far from the only policy argument to be had on updating the election code, but it will likely garner a fair amount of attention.

Some Republican lawmakers have indicated they intend to work on election code updates in conjunction with the state budget, due June 30.  While unrelated policy items are often tied in with the budget deadline, neither side has tipped its hand on how willing they are to tie up the budget process with election reforms.

Missing budget deadlines has never seemed to bother Gov. Tom Wolf. However, this year will be the first he faces without a Democratic state treasurer to cut checks without legislative approval.  It’s a new factor in the ever-changing world of Pennsylvania politics, and may give leverage to supporters of election reform.