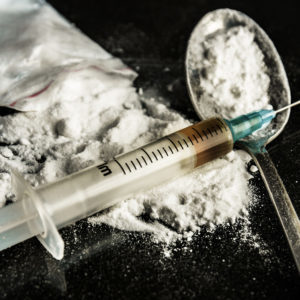 The Montgomery County District Attorney’s office announced Friday charges against a Philadelphia man alleged to have contributed to the April overdose of 36 year-old Patrick Cumiskey of Abington Township.

District Attorney Kevin Steele’s office is charging Edwin V. Rodriguez, 37, with 12 different criminal counts including possession with intent to deliver. His bail is set at $250,000.

Investigators say they used video surveillance and phone records to link Rodriguez to Cumiskey, who was found dead in his residence on April 13. Interviews with the victim’s family revealed Cumiskey had been dealing with heroin abuse.

A search warrant executed about a week later on Rodriguez’s residence turned up “555 baggies of fentanyl/heroin, 120 vials of methamphetamine, 80 grams of crack cocaine, two pounds of marijuana and multiple pills,” according to a press release from the DA.

“In the last four years, we have investigated more than 450 overdose deaths, looking to connect the dealer who sold the drugs that caused someone’s death,” Steele said in the release.  “In a number of these cases, we have charged the dealer with Drug Delivery Resulting in Death, but in some cases, due to multiple drugs in the victim’s body, we were unable to sustain that charge.”

The news comes as concerns have grown that the societal lockdowns imposed in March to stop the spread of the coronavirus would possibly lead to a spike in overdose deaths, especially as some people might be dealing with additional hardships of the loss of a loved one or a job loss.

Some counties across Pennsylvania are already seeing those fears realized.

“Confirmed and suspected opioid deaths in York County tripled in March from January’s number,” a report from Local 21 News, the CBS affiliate in Harrisburg, noted. “York County Coroner Pam Gay says she 100 percent believes it is a result of the COVID-19 pandemic.”

“In Cumberland County, 24 people have died of overdoses so far this year, with most deaths occurring after March 1,” PennLive.com reported. “[The Cumberland County coroner] said almost all involved fentanyl, an opioid.”

Delaware Valley Journal asked about overdose deaths to the four “collar” counties in early May. All of them except Chester County said it was too early to provide any data because toxicology results can oftentimes take anywhere from 6-8 weeks, delaying the final autopsy report.

“Chester County PA had 33 overdose deaths in [the first quarter] of 2020, compared with 29” from the same time period of 2019, an official with the county coroner’s office said.

The increase in Chester County is not large enough to say with certainty if the overdoses were related to the COVID-19 lockdowns, and also don’t incorporate the key months when the lockdowns began to take a toll on lives and livelihoods.