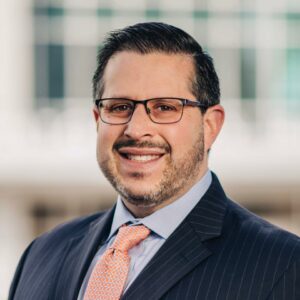 As Montgomery County Democrats confront a challenging environment, they have selected a new chair to guide them into the 2022 midterm elections.

Jason Salus, formerly executive vice chair of the Montgomery County Democratic Party, is the new chairman. He is no stranger to Democratic politics, having chaired the Springfield Township Democrats and been Democratic area leader for Conshohocken, Plymouth, and Whitemarsh.

“My sister and I had health insurance through the CHIP program for lower-income kids, while my parents did not have health insurance at all,” he said. He recalled KYW airing a segment of a speech from then-presidential candidate Bill Clinton about health care reform, which resonated with him.

When he pointed out to his father how the speech “struck a chord” with him considering his family’s health care status, his father encouraged him to get involved despite not being very political.

“That night, we went home, got out the white pages, and looked up the number for our local Democratic committee person,” he said. Soon after that, Salus was knocking on doors after school and greeting voters at the polls. “That experience taught me that everyone, even at 13 years of age without politically-connected parents, can make a difference by rolling up their sleeves, doing the hard work, and volunteering for even a few hours a week.”

Outside of his roles inside political organizations, Salus was elected as a councilman in Conshohocken, and then he was elected Montgomery County Treasurer in 2011 in a narrow 2,500 vote win. He was re-elected in 2015 and 2019, increasing his margin of victory.

In a Facebook post earlier this month Salus attacked Montgomery County GOP Chair Liz Preate Havey for participating in a fundraiser for the Republican gubernatorial nominee.

“Doug Mastriano paid for antisemitic, alt-right extremists on Gab to join his campaign,” Salus wrote, referring to Mastriano’s work with the site where the Pittsburgh Tree of Life synagogue shooter made antisemitic posts before the deadly 2018 attack. “By hosting a fundraiser for Mastriano last week, Montgomery County GOP Chair Liz Havey aided and abetted this unacceptable hatred and antisemitism that has no place in our communities,” he claimed.

Mastriano has since distanced himself from Gab and the network’s controversial CEO. Havey did not respond to DVJ’s request for comment.

“He has been an incredible colleague and friend,” she said. “His devotion to our party, our candidates, and our constituents is truly honorable.”

As chair, Salus said his top priorities for Montgomery Democrats are filling vacant committeeperson spots and providing the necessary training for all of them to be prepared to win the races the party needs.

“Motivate them to knock on more doors, get to know their neighbors, and share information about our Democratic candidates and the options for casting a vote in every election,” Salus said. “I still do not shy away from hard work.”