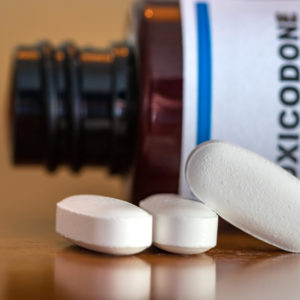 The Montgomery County District Attorney’s office is warning citizens about counterfeit oxycodone pills being sold in the Delaware Valley that are laced with fentanyl and could be deadly as a result.

The warnings come after authorities arrested Leon M. Wright, 33, of Philadelphia. District Attorney Kevin Steele is accusing Wright of selling blue pills with imprints making them look like oxycodone, but were instead discovered to contain fentanyl, heroin and Levomethorphan — all illegal substances. Levomethorphan is reported to be five times stronger than morphine; fentanyl is 80-100 times stronger than morphine.

“Drug traffickers like this defendant who sell what they say are prescription opioid pills can actually be selling cheap fentanyl, heroin and other illegal substances pressed into molds and made to look like legitimate opioid pills — but they are much stronger and much deadlier. People buying these poisons need to be very, very careful,” Steele said.

“Our detectives recently responded to an overdose death of a young woman who thought she bought and consumed an ecstasy pill and in fact, lab reports reflected the purchased pills were actually fentanyl.”

Montgomery County detectives and Upper Merion Township police surveilled Wright and said they observed him making numerous drug sales in King of Prussia. When they later executed a search warrant on his home and car, they say they recovered nearly 350 of the fake oxycodone pills.

They also say they seized $68,000 in cash from the residence, along with a firearm and numerous other smaller amounts of other drugs and drug packaging.

A press release from the DA’s office says Wright has already been arraigned, and he remains in jail after his bail was set at $500,000. His next hearing is scheduled for September 21.

Authorities have been steadily sounding the alarm about a rise in drugs that are “cut” with fentanyl.

For example, Centre County District Attorney Bernie Cantorna last week said that the county has seen a sudden spike in overdose deaths — and believes fentanyl is a culprit.

On the other side of the country, San Diego County, California, experienced 152 fentanyl-related overdose deaths last year. “But in the first six months of this year, there are likely already 203 fentanyl-related deaths, of which 119 have been confirmed and another 84 are pending confirmation,” the DEA said on its website.