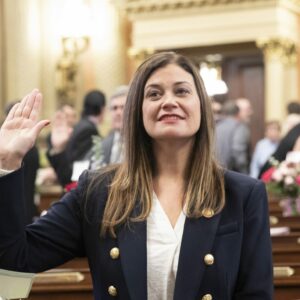 Rep. Kristin Marcell (R) is sworn in to represent the 178th District.
News

Now that she has been sworn into her first term in the Pennsylvania House of Representatives to serve the people of Bucks County, Rep. Kristin Marcell (R-Richboro) said she is ready to get to work.

“I’m honored to represent the residents of the 178th District, and I thank them for placing their faith in me to share their concerns and craft legislation to solve those problems,” Marcell said.

Before Marcell was elected to the House, she was a communications professional, Council Rock School Board member, and community volunteer. She is also a lifelong Bucks County resident and graduated from Council Rock High School in 1995. “As a native of Bucks County, I believe we need to bring people together to find common ground, establish relationships based on trust and respect, and get things done,” Marcell said. “Regardless of policy differences, we can work together to tackle difficult problems and take action to move forward for our communities – all without vitriol and personal attacks.”

Marcell brings extensive experience from both the public and private sectors to Harrisburg. After graduating from college, Marcell worked in Washington, D.C. at the U.S. Department of Transportation as the communications director of the Federal Motor Carrier Safety Administration.

Marcell’s experience in the private sector included two decades of providing strategic and communications counsel to businesses in the energy, environmental, and utility industries.

“I’m passionate about ensuring people have a voice in government. Unfortunately, that was lost during the pandemic, something we must never lose as a democracy,” Marcell said. “Beyond that, there are many issues important to my constituents, including public safety, improving education, getting our economy moving again, and a host of local issues that I want to focus upon.”

In 2014, Marcell attended her first school board meeting as a concerned parent advocating alongside other community members to save their local elementary school from closure.

“During that community-driven effort, I realized there was more I could do to help all our children,” Marcell said. “That’s why I ran for the Council Rock School Board – to advocate for students, ensure parents have a say in their kids’ education, and focus on real priorities to protect homeowners and taxpayers.”

While on the school board, Marcell learned working together and taking action can make all the difference, whether as a small group like the school board or in a body of 203 members like the Pennsylvania House.

“From my vantage point on the Council Rock School Board, I saw firsthand how decisions in Harrisburg during the pandemic impacted our students, families, and small businesses,” Marcell added. “Our community deserves a strong voice fighting for them in the capital.”

In addition to her work on the school board, Marcell served on the Middle Bucks Institute of Technology’s Executive Council. Marcell’s educational background includes a BA in political science from Penn State and a master’s degree in public policy from George Washington University.

Marcell lives in Wrightstown with her husband, Steve, and their two children. Outside of work, Marcell enjoys spending time with friends. She is an avid Penn State and Philadelphia sports fan.