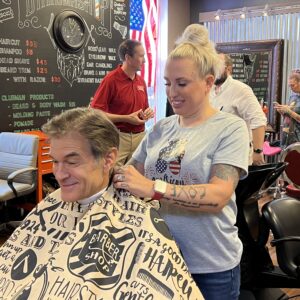 Dr. Mehmet Oz’s bedside manner was on display during a campaign visit to Media Thursday, where he met with small business owners.

The Republican U.S. Senate candidate stopped at Giovanni’s Media Barber Shop where owner Nichole Missino warmly greeted him. Missino is also a GOP candidate for state representative challenging Democratic incumbent Jennifer O’Mara in the 165th District. She is known as one of the small business owners who defied the COVID closure orders and reopened her business with personal protective equipment.

Oz asked her whether it was difficult to hire people. Last summer Missino had problems finding people because they would fill out applications just to stay on unemployment. But recently she had six qualified people apply for a job opening.

“I hope the economy will start coming back,” she said.  Many of her customers have remained loyal. 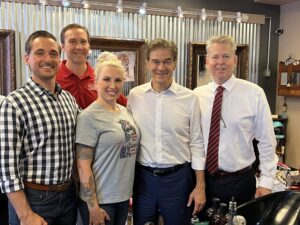 “They talk a lot of politics here,” said Missino. “They know I’m running. And they all talk about inflation. We just had to raise our prices in April.”

“My main thing is I’m fighting for freedom,” she pointed out. “I fought for freedom for my employees. I want to fight for freedom for people in my district…I just want to get in there and help people.  I’m an unconventional candidate for unconditional times. You don’t usually see anyone running for office who is covered in tattoos.”

“The gas (cost) is killing everybody. It’s insane,” she said.

After someone mentioned that he was getting a bit shaggy, Oz took a turn in the barber’s chair, allowing Missino to give him a trim. Oz said during the pandemic his daughter, who is a chef, cut his hair.

“For a long time during COVID, my daughter cut my hair. She’s pretty good with scissors and a knife,” Oz said. “I feel so pampered,” he told Missino.

While he was getting his trim, the Delaware Valley Journal asked Oz why voters who are leaning toward his opponent, Lt. Gov. John Fetterman, should vote for him instead.

“It’s one simple decision. If you think the country is going in the right direction, then John Fetterman is going to pull the president even further in that direction. If you’re worried about where we’re going, I’m the other solution, a person for change. And I’m outside the system. John’s been in politics for years. He’s part of the establishment. And he’s one of the ones in charge of COVID management, some of the issues these folks are worried about. And I was the one pushing back for science to be the driving force behind many of our decisions.

“And for energy policy, where scientifically speaking we’re very wise if we use natural gas, it’s such a clean source of energy, as we transition to green,” Oz said. “I also feel the same about the values we share with our kids…Early on in the pandemic I kept saying if you mix politics and medicine, you get politics.

“You don’t want politics involved,” he said. “Give people the autonomy to make their own decisions as much as possible.”

Oz also visited Kenny’s Flower Shoppe and spoke with owner Joyce Walker, a former special education teacher. Some of her employees are special needs individuals, she said. She shared her experiences, telling Oz about how an active shooter training had affected her so profoundly that she left the profession.

“My very last day of teaching… we had to go through armed shooter training. With the FBI. And the first thing they did was show us actual video of 5 and 6 year-olds in a shooting. It was very, very devastating to think, ‘I am that last line of defense.’”

“I’d love (violence) to be addressed by everybody…to hear the stories every day from Philadelphia…No matter how many flowers I bring to funerals you never get used to it. You can’t. (In Delaware County) an Asian man was going too slow and a guy got out at the light and shot his head off in front of his wife.”

Walker wiped back tears and Oz enveloped her in a hug. 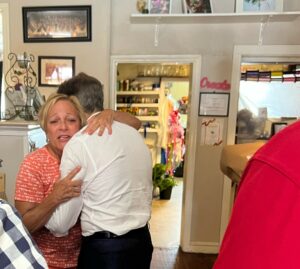 “We’ve been through a massive experiment that failed,” said Oz. “We’ve got to restore a sense of civility to the city.  What bothered me most of all of these shootings, it hit me hard, was the South Street (shooting). I took my wife there on our first date.”

Oz asked Walker about other experiences as an educator and how to reach children who are falling through cracks in the system. He mentioned visiting charter schools in Chester County that are doing a good job educating minority children.

She said while small classes help, parents who are not working several jobs to support their family and can be with their children should help with homework.

To survive the pandemic, Walker opened an online shop and would offer to arrange flowers from people’s gardens for funerals when commercial flowers were unavailable.

Because of high gas prices, she now calls to make sure someone is home before making a delivery so the driver does not have to make a return trip to a house.

Democrats have made allegations that Oz is a resident of New Jersey, not Pennsylvania, their top attack. Asked about the issue, Oz shrugged it off.

“I’ll tell you what the data shows. People much care more about what you stand for than where you’re from. If that’s the best they can do, I’m in pretty good shape.”